Can an Ancient Friendship Help Save Corals? 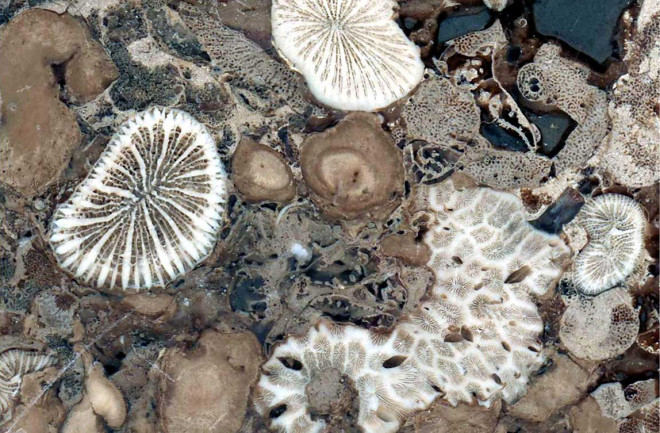 A polished slab of fossilized coral used in the study. (Courtesy of Jarosław Stolarski/Polish Academy of Sciences) It's a friendship for the ages. The symbiotic relationship between corals and dinoflagellate algae extends at least back to the Triassic Period 210 million years ago, says an international team of researchers. Examining fossil corals discovered in Turkey and comparing them to modern-day examples, the researchers say that they have found evidence of patterns that only arise when corals and algae cohabit. This pushes back the timeline of modern-looking corals and could give researchers insights into how to better protect coral reefs endangered by climate change the world over.

Corals depend on algae to provide them with nutrients that are byproducts of photosynthesis; in return, the algae get waste products from the corals. The researchers think this process began millions of years ago when ancestral corals were faced with an environment that didn't contain many nutrients. Using the algae to turn sunlight into food would have given them an evolutionary advantage, and the relationship has endured for more than 200 million years. Corals have become so close to their algae roommates, called zooxanthellae, that they can no longer survive without them. In times of stress, often brought on by rapidly warming waters, corals will nevertheless expel their algae symbiotes in a last-ditch effort to protect themselves — what's known as a mass bleaching event. This leaves them naked and pearly white, bereft of both their colors and their source of energy. If the algae return in time, the corals will survive, albeit weakened by the experience. If they don't come back, they die. "It strengthens the case that the existence of these corals in the first place is directly tied to their ability to use symbiosis," says Daniel Sigman, a professor of geosciences at Princeton University and a coauthor of the study. The researchers revealed evidence for symbiotic corals dating back so far by using several new and updated techniques to study fossils from the Tethys Sea, an ancient sea located in modern-day Turkey. They first examined tiny growth rings in the fossil corals that result from consecutive layers of hard exoskeleton being laid down. In symbiotic corals, the space between these growth rings is very regular, as opposed to wide variance of asymbiotic corals — less common corals that don't rely on algae. Finding regularly spaced rings indicates the corals were assisted by algae as they grew. Researchers also looked at the ratios of nitrogen isotopes present in the corals. Using modern-day corals as a reference, they knew that corals with algae present have a lower ratio of one nitrogen species to another. They found the same ratio in the fossilized corals, indicating that they too were symbiotes. Their results were published Wednesday in Science Advances.

As coral reefs face ever more dire prospects amidst global warming, researchers are racing to better understand what exactly triggers bleaching events. On top of that, increasing ocean acidification and the presence of light-blocking algal blooms threaten corals as well, and Sigman says that understanding how all of these factors fit together will be crucial to protecting coral reefs. For example, while understanding acidification is important, his most recent research indicates that developing symbiosis was a fundamental turning point in the evolution of these corals. "The degree [to which] the very origin of coral reefs comes with that symbiosis, it points to the importance of the bleaching issue and maintaining nutrient-poor environment for corals as being critical to their survival," says Sigman. Sigman says that their work represents yet another step for researchers attempting to extract information from fossil corals. They have gone from examining how fossils look to what they are made of, to now examining the remnants of organic matter left in the mineral matrix that surrounded them. As researchers gear up to help corals fight against global warming, they'll need all the information they can get.