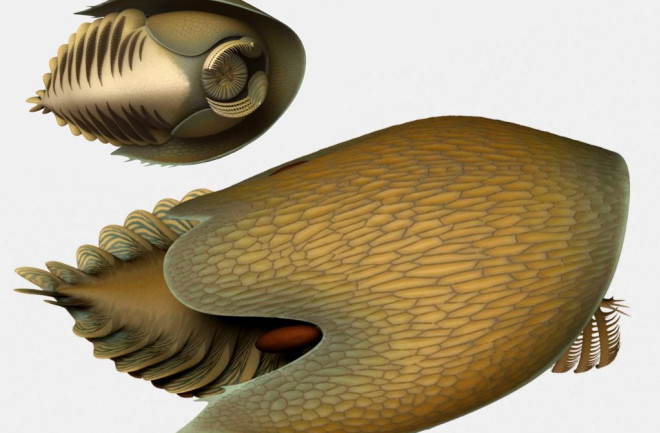 Artist rendering of Cambroraster, a predator from half a billion years ago. (Credit: Lars Fields © Royal Ontario Museum)

Half a billion years ago, Cambroraster falcatus was a bizarre predator of the Cambrian seas. As it moved through the water, enormous mouth and rake-like claws at the ready for its next meal, it cast a shadow on the seafloor reminiscent of the most famous bucket of bolts in the entire Star Wars galaxy: the Millennium Falcon.

Cambroraster grew to about a foot long. That may sound like small potatoes, but during the Cambrian, when most lifeforms could have fit in the palm of your hand, it was kind of a big deal.

A huge head carapace — a hard shell like that of an arthropod’s exoskeleton — accounted for most of the animal’s size. Cambroraster’s mouth was lined with teeth, and fronted by rows of claws with tines, resembling lawn rakes or sharp combs.

Sift For Your Supper

The animal’s strange claws puzzled the team that excavated multiple specimens from 505-million-year-old shale in the Canadian Rockies. The paleontologists suspect that Cambroraster used its claws to sift through sediment and trap prey, then cram the food into its mouth.

That mouth — a gaping maw ringed with teeth — is a clue to Cambroraster’s spot on the Tree of Life. The Sarlacc-like mouth places it in Radiodonta, a now-extinct branch that split off early from arthropods, which today include insects, spiders and crustaceans.

In case you forgot what the Sarlacc looked like (Credit: Lucasfilm Ltd.)

The More The Merrier

One of the most exciting things about Cambroraster is how many specimens the scientists have to work with. Since 2012, excavations at multiple sites in British Columbia’s Kootenay National Park, about 80 miles west of Calgary, have turned up at least 140 individuals. The plethora has made it possible to reconstruct the animal at a fine resolution usually unknown in Cambrian fossils, which tend to turn up piecemeal.

Cambroraster may remind you of horseshoe crabs (which aren’t crabs, by the way). Horseshoes have a similar body plan to Cambroraster and, since they’ve been around for the last 450 million years, are often called living fossils.

However, paleontologists do not believe the two animals are closely related. While they’re both arthropods, it appears likely that horseshoe crabs and Cambroraster share their good looks due to convergent evolution, when two species develop similar traits because they occupy similar ecological niches.

And if you’re grumbling that Cambroraster looks nothing like the legendary ship that made the Kessel Run in less than 12 parsecs, hey, don’t blame me. Researchers came up with the species designation, falcatus, because they saw the resemblance.

The research appears today in Proceedings of the Royal Society B.

Complete fossil of Cambroraster falcatus, showing the eyes and the body with paired swimming flaps below the large head carapace. The shale preserving the fossil was split in half, leaving parts of the body on both sides. (Credit: Jean-Bernard Caron © Royal Ontario Museum)
1 free article left
Want More? Get unlimited access for as low as $1.99/month
Subscribe