California’s Bald Eagles Are Back! Now for the Bad News. 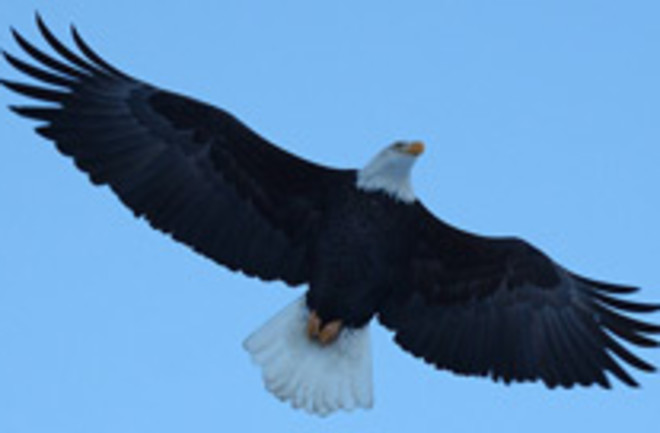 The comeback of the bald eagle has been one of America's great environmental success stories. The mighty eagles nearly vanished from the continental United States in the 1970s due to habitat loss, hunting, and use of the pesticide DDT, which thins the birds' eggshells. But bald eagle populations have rebounded in the decades since the federal government banned DDT and put strict protections in place, leading conservationists to reintroduce the eagles to historic habitats, like Southern California's Channel Islands. But a new study in the Proceedings of the National Academy of Sciences suggests that the story's happy ending may be more complicated than expected. Conservation biologist Seth Newsome of the University of Wyoming reconstructed the eating habits of the bald eagles who lived on the islands until the late 1960s by analyzing old bones and feathers. He found evidence that resurgent eagles on the Channel Island may threaten another endangered species.

The data reveal that when marine resources of food, such as fish, weren't available, eagles readily adapted to terrestrial alternatives. In the past, that meant eating carrion from sheep and pigs, but ranching no longer takes place on the island. Enter the endangered island foxes, who've seen their numbers decline due to a combination of habitat destruction and, since the 1990s, predation by golden eagles [ScienceNOW].

And if the eagles turn to seal and sea lion carcasses that wash up on the island beaches, there's another problem. Wildlife biologist Peter Sharpe, who wasn't involved in the study, explains:

"There is a concern," Sharpe said. "We know that [the eagles] have always fed on dead marine animals. DDT and other contaminants are often stored in the blubber, which is most accessible to anything feeding on them" [National Geographic].

The study serves as an early warning for the conservationists working on the Channel Islands, but some experts say the concerns are overblown--noting that the bald eagles still prefer to feast on fish. However, everyone agrees that there's a way to head off trouble while accomplishing another environmental goal. If the government clamps down on overfishing around the islands, the researchers say, the eagles will have plenty of fish to feed on and won't have to go in search of more exotic meals. Related Content: 80beats: Poison Campaign Kills the Invasive Rats of Rat Island, but Kills Eagles Too 80beats: 20 Years After Valdez Spill, Eagles Are Healthy; 7 Other Species Still Hurting 80beats: Bye Bye Birdie? One-Third of American Birds Are in Decline