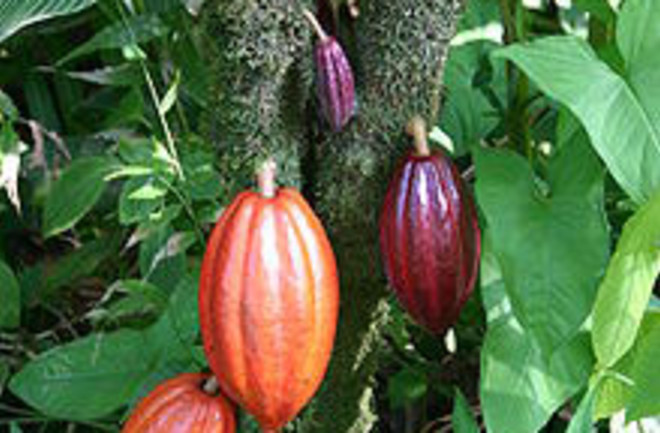 It's the most delicious genetic breakthrough yet. A consortium led by Mars Inc., the company behind such treats as M&Ms and Snickers, has announced the rough draft of the cacao tree's genome, and researchers say the information could lead to improvements in the chocolate supply. While the scientists are just beginning to analyze the genome, understanding the tree's innermost workings could lead to breeding programs for drought- or disease-resistant varieties, or even for trees that produce tastier or healthier cocoa. The consortium has put the data online at the Cacao Genome Database for use by any and all.

The tree, known officially as Theobroma cacao (meaning “food of the gods”), contains about 420 million DNA units, represented by the letters A, C, G and T. That is fairly small for a plant. The human genome has about three billion units. [New York Times]

In a strange twist, the quest for the cacao tree genome became a race between two companies that typically compete in the candy aisle of your local drug store, Mars and Hershey

. According to a New York Times

report, the Hershey-led research project has also finished a rough draft of the genome, but can't discuss its work until a journal article is published. The genetic data will be precious to those who cultivate and rely on the cacao tree, researchers say.

Despite its seeming ubiquity on newsstands, chocolate is reliant on a notoriously fragile crop that has been plagued by pests and disease. In the 1980s, Brazil was a top cocoa exporter. Then a fungus known as witches' broom infected cacao trees and decimated the industry.

After that crash in the South American cacao market, production shifted to Africa.

Today, about 70 percent of the world crop is grown in West Africa, and several million small farmers depend on it for their livelihoods. Scientists say it might be possible to as much as quintuple the output of beans per acre in Africa through breeding that relies on genetic information. [New York Times]

80beats: Do You Eat Chocolate to Relieve Depression–or Does Chocolate Make You Depressed?

DISCOVER: Endangered Chocolate DISCOVER: Getting Drunk on Chocolate in 1100 B.C. Cosmic Variance: The Physics of Chocolate