Walks through a forest are often made all the more enjoyable by the chance to watch brightly coloured birds flit between the trees. But birds are not just mere inhabitants of forests - in some parts of the world, they are the key to the trees' survival. 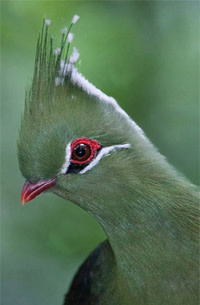 The Serengeti is one such place. Since 1950, around 70-80% of riverside forests have disappeared from this area. Fires seem to be a particular problem, opening large gaps in the canopy that forests can't seem to recover from. To understand why Gregory Sharam from the University of British Columbia has been monitoring the density of the forests since 1966. From 1997-2006, he studied 18 particular patches at varying stages of decline.

During this time, as the forest density declined, so too did the number of bird species in the area. The total number halved and fruit-eating species were especially hit, declining from 16 to 6 species. These fruit-eaters perform a valuable service for a wide variety of trees, eating their fruit and dispersing their unharmed seeds. In pristine forest, around 70% of all seeds on the forest floor have previously passed through the guts of birds. In fragmented open forest, that proportion falls to 3%.

Without fewer birds, seeds that simply fall to the ground become more important for the trees' survival but these too suffer without their feathered friends. They are destroyed by seed-eating bruchid beetles. The beetles generally avoid seeds that are still on trees and for some reason, they also steer clear of seeds that have been previously eaten by birds. But seeds that naturally drop to the ground are fair game and as tree density fell, the beetles' attack rate climbed from 20% to 90%.

It's clear that passing through a bird doesn't really harm a seed's chances of survival - either way, around half of them germinate. The same isn't true for seeds attacked by beetles - they are damaged so substantially that not a single one of them becomes an adult tree. Birds, then, run an inadvertent protection racket that guards the seeds of forest trees from the jaws of hungry, hungry beetles.

In the Serengeti, fires have driven away forest birds, which left the beetles unchecked. Seeds were lost and the density of new trees started to fall. As the forest becomes increasingly sparse, the birds become even more likely to find different homes and the previously stable community unravels even further.