Butterflies and Moths May Have Predated Flowers 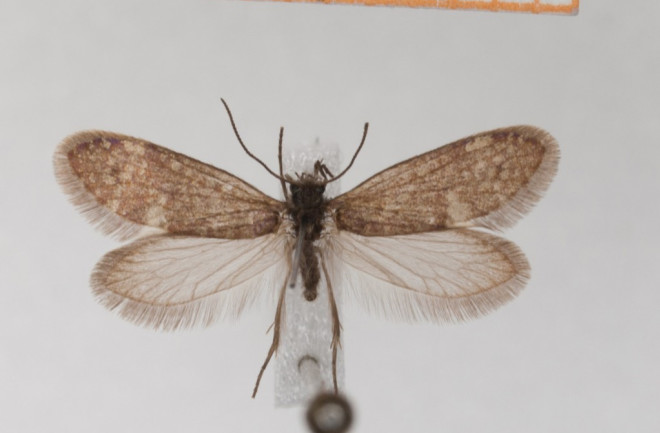 This is a living representative of a primitive Glossata, moths that have a proboscid that suck up fluids like nectar. (Credit: Hossein Rajaei) Think of some scaly animals. Odds are butterflies didn’t come to mind. But butterflies and moths have scales on their wings, legs and bodies. Thanks to those scales, researchers have found the oldest known fossils of butterflies and moths, both in the order Lepidoptera, according to a paper published Wednesday in Science Advances. While the Lepidoptera order is highly studied, scientists know little about its evolutionary history. But understanding how these primitive butterflies and moths evolved is important to shedding light on how modern day climate change could impact today’s insects.

Example of a 201 million year old serrated hollow scale derived from a glossatan (proboscid-bearing) moth, providing evidence for an early Mesozoic evolution of the Glossata, refuting their ancestral relationship with flowering plants. (Credit: Timo van Eldijk) Researchers analyzed about 70 scales and scale fragments, mostly wing scales, which were found in a drilled core dating back about 201 million years to the Triassic-Jurassic period in northern Germany. Some of the wing scales resemble living Glossata, moths that sport a tongue-like sucking device called a proboscis to feed on liquids like nectar Flowering plants, which moths and butterflies feed on with their liquid sucking “tongues,” didn’t exist during the early Jurassic period, or at least that we know of. This leads researchers to believe these primitive insects fed on plants such as gymnosperms, challenging the belief that developing the proboscis was an adaptive response to the evolution of flowers. Scientists from an August 2017 study estimate the first ancestral flower evolved between 140 and 250 million years ago. That means the sucker may have come before the flowers. The scientists hypothesize the proboscis could have evolved during the late Triassic period as a way to help the insects maintain necessary water levels in that hot and arid environment. These findings are but a glimpse into the evolution of butterflies and moths, but it’s a start.