Build it up or let it drown: future prospects for a disappearing nation

For many people, the idea of setting up shop thousands of miles from anywhere on a remote Pacific island, surrounded by palm trees and crystal blue water, sounds like a dream come true. In reality however, life on many of these islands, especially the low elevation islands, is anything but paradise. While developed countries shouldn’t expect to feel the effects of climate change for another 20-30 years, low elevation islands sprinkled across the Pacific Ocean are feeling the effects of climate change today.

This is a guest post by Jamie M. Caldwell, PhD Candidate at the

NASA Earth and Space Science Fellow. I invited her to write this post for her perspective on the ongoing discussions at COP21 in France, as she was in the Marshall Islands this past June to teach climate science to high school teachers. 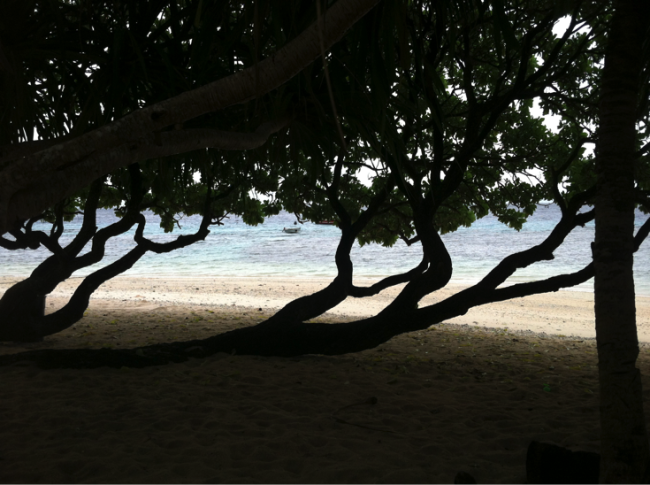 It’s becoming more and more difficult to ignore the fact that climate change is fueling human conflict over land and natural resources in light of droughts that intensified the ongoing Syrian refugee crisis and the El Nino-strengthened forest fires raging across Borneo and Sumatra. As climate change renders greater areas of land inhospitable, large numbers of people will need a new place to call home. People from the Republic of the Marshall Islands, a remote archipelago made up of 29 atolls in the middle of the Pacific Ocean, are expected to be the world’s first “climate refugees”, or people forced to flee their nation because of climate change. Most of the Marshall Islands are less than a mile wide and 6 feet high. Majuro, the nation's capital and most densely populated island, is on average 20 cm above sea level, with the highest elevation just 3 meters above sea level. Almost monthly, spring tides (and King Tides) flood these atolls causing extensive damage to buildings and homes. With the sea level rising nearly 7-8 millimeters per year in the Marshall Islands, flooding and salt water inundation are becoming more severe and more frequent. Even naturally salt-tolerant plants such as Cassava and Breadfruit (which have become staple crops in the Marshall Islands because they fair better than others in the nutrient-poor, saline dirt) are becoming difficult to grow, as the soil has become saltier in recent years due to seawater inundation. Foregoing just one Breadfruit tree for example, can make it difficult for people to produce enough food to eat or earn a living.

"It's not hard to imagine these islands underwater when you’re standing on a sliver of land with a seemingly never-ending blue ocean on both sides." 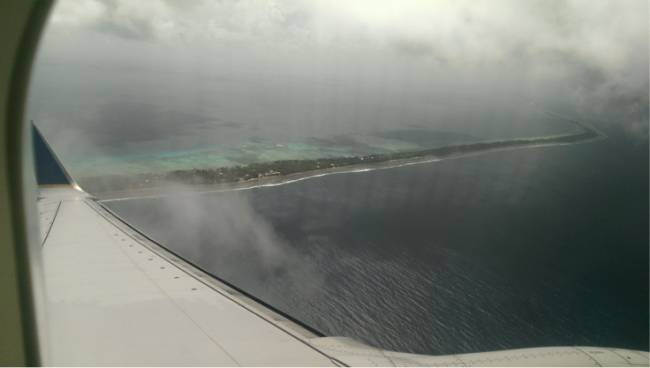 Ariel view of Majuro, Marshall Islands. Photo credit: Michelle Tigclelaar The Marshallese people aren't going to “disappear” without a fight though, and they have unique leverage to make their concerns heard because of a complex history with the United States. In return for the Marshallese allowing the US to bomb the heck out of Bikini and Enewetak Atolls (dropping 67 nuclear bombs in and around those islands in the 1940s and 50s), the Marshallese people are allowed to emigrate to the US for free, and Bikini Islanders specifically are entitled to US government funds so long as they remain in the Marshall Islands. Therefore, the current options for the Marshallese people are to stay in the Marshall Islands as long as possible or emigrate. Staying in the Marshall Islands means enduring monthly flooding events bringing sewage and trash into homes and inundation of saltwater making it more difficult to secure freshwater and grow food. Leaving, on the other hand, means giving up cultural identity and heritage and place-based knowledge. And if they chose to leave, they may not be welcomed with open arms. In Hawaii, for example, there is animosity towards Micronesian immigrants, who are perceived as burdens on health and human services. 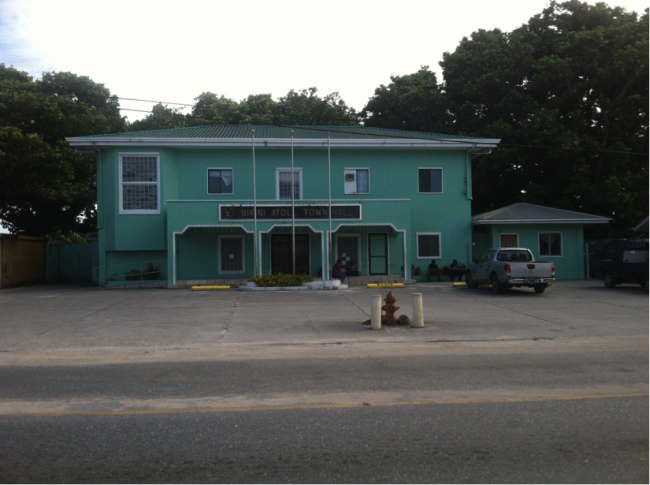 Bikini Atoll town hall is now located in Majuro. Photo credit: Jamie Caldwell Tony A. deBrum, the foreign minister of the Marshall Islands, is trying to negotiate with the United States in one of the most effective ways possible: with money. He is telling people in Washington D.C. (and other world leaders) that what happens to the Marshall Islands will directly affect US immigration policy, national security and taxes. He wants to see a restructured fund for Bikini Islanders, including allowing that money to support Islander’s emigration into to the US. He also says that with enough money, all the populated islands in the Marshall Islands can be transformed similar to the way the U.S. transformed Kwajalein Atoll, a U.S. military base in the Marshall Islands. Kwajelein has desalination machines to turn seawater into freshwater and sturdy sea walls to resist wave action and coastline erosion, both of which buy the island time against rising waters. Yes, it’s certainly possible to build up the Marshall Islands in this way, increasing the mean elevation a few meters — but it will only buy the islanders a few decades at best. And this transformation would be extraordinarily expensive, given that many of the islands are not even equipped with electricity. Such efforts don't seem like the most efficient way to spend our tax dollars. But economics aside, the real question is: do we have a moral responsibility to help the Marshallese people?

I spent a week in the Marshall Islands this past year teaching high school science teachers about climate change. It was a very humbling experience. It's not hard to imagine these islands underwater when you’re standing on a sliver of land with a seemingly never-ending blue ocean on both sides. It was difficult for me to stand in front of a classroom of smart, dedicated teachers and explain in detail why their country may not exist within their lifetime — and how my home country is contributing to the loss of theirs. Many Marshallese scientists are trying to document how climate change makes a country uninhabitable as a warning for the rest of the world. While I found it disheartening and difficult to teach about climate change in a place so drastically effected by it, deBrum has a much larger obstacle in front of him. How do you make people care about somewhere they have no personal connection to? Living in Hawaii and visiting islands around the Pacific, I am finally starting to understand the importance physical places and trans-generational knowledge to local cultures, but it is a difficult concept to convey to someone who has never experienced it. I think deBrum’s approach to building climate adaptation plans is strategic in many ways. As much as the stories of flooding homes and lost revenue from agriculture can pull on people’s heartstrings, the only way to gain traction in Washington is to provide sound economic support for why certain actions need to be taken. And as much as I’d hate to see the Marshall Islands “disappear”, I’m not convinced flooding their economy with taxpayers’ money is the right solution either. Pour in enough money and technological innovation, including more stable architecture and salt-resistant crops, and the Marshall Islands could prosper for many decades to come. But eventually, we will find ourselves forced to answer the same questions we are facing today as thermal expansion continues to make sea level rise. What will we do then?

"It was difficult for me to stand in front of a classroom of smart, dedicated teachers and explain in detail why their country may not exist within their lifetime — and how my home country is contributing to the loss of theirs" 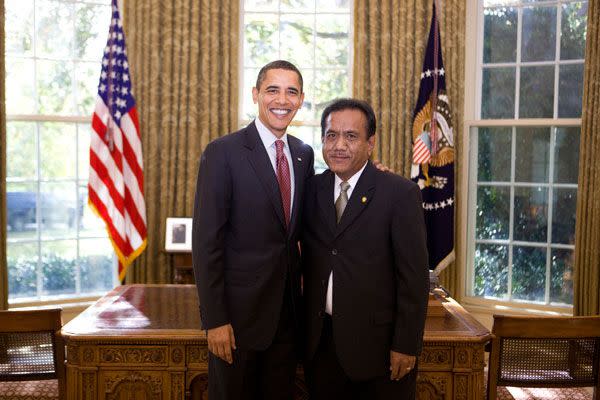 Obama and deBrum meet in Washington to discuss the plight of the Marshallese. Photo credit: U.S. Department of State While the Marshall Islands are an interesting case because of their intertwined history with the US, they are just the first of many nations that is headed down this complex path, "disappearing" from human-caused climate change. In these cases, which nations will step up by providing financial support for climate adaptation strategies or, inevitably, by welcoming climate refugees as foreign nationals? What does our national conscience tell us to do? There were over 300 comments on the New York Times article that spurred me to write this commentary. People have opinions about this topic, but as a nation we rarely talk about the tangible and irrefutable evidence of how climate change is affecting people all over the planet TODAY. It seems fitting to start the discussion in the midst of remembering the Pearl Harbor attacks and dropping of the atomic bombs in Japan days later. Our actions today will affect many future generations, and we simply cannot afford to do nothing any longer.