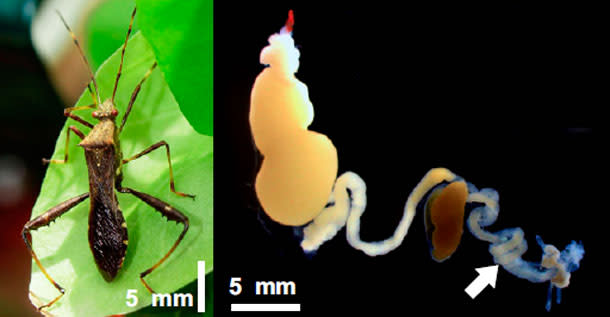 Many insects eventually evolve to resist insecticides. This process typically takes many generations and involves tweaks to the insect’s genes. But there is a quicker route. Japanese scientists have found that a bean bug can become instantly resistant to a common insecticide by swallowing the right bacteria. The bug forms an alliance with Burkholderia bacteria, and can harbour up to 100 million of these microbes in a special organ in its gut (see arrow above). Some strains of Burkholderia can break down the insecticide fenitrothion, detoxifying it into forms that are harmless to insects. In fields where the chemical is sprayed, these pesticide-breaking bacteria rise in number. And if bugs swallow them, they become immune to the otherwise deadly chemical. I’ve written about this story for The Scientist, so head over there to read the details of the study. To me, the alliance is fascinating because the bug is coping with a new environmental challenge by bolstering its own genome with that of a microbe. Many creatures rely on microscopic partners to safeguard their health. Insects inherit beneficial bacteria from their mothers, which help them to resist other bacteria that would cause disease, or fight off parasitic wasps that would usurp their bodies. Our own gut bacteria could be important for preventing nasty infections. And even bacteria can resist antibiotics by incorporating the genes of infectious viruses into their own DNA. Nature is full of bigger things using smaller things as living preventive medicine. If the bean bug example stands out, it’s because many of the other cases involve microbes that are passed down from parent to offspring. The bug, however, has to get its bacteria from the surrounding soil with every new generation. Two of the scientists I spoke to said that this makes perfect sense. Nancy Moran pointed out that bacteria have a much wider range of metabolic abilities than animals do. If you’re facing a man-made poison, chances are there’s some microbe that can break it down. And Molly Hunter pointed out that this metabolic diversity tends to plummet in bacteria that become dependent on their hosts. These internal symbionts tend to lose important genes, so free-living microbes may be a better source of detoxification genes. Hunter delightfully described it as an “open-source symbiosis”. Reference: Kikuchi, Hayatsu, Hosokawa, Nagayama, Tago & Fukatsu. 2012. Symbiont-mediated insecticide resistance. PNAS http://dx.doi.org/10.1073/pnas.1200231109