5,000 years ago, people living in Turkey were surprisingly good at what seems like a purely modern practice. 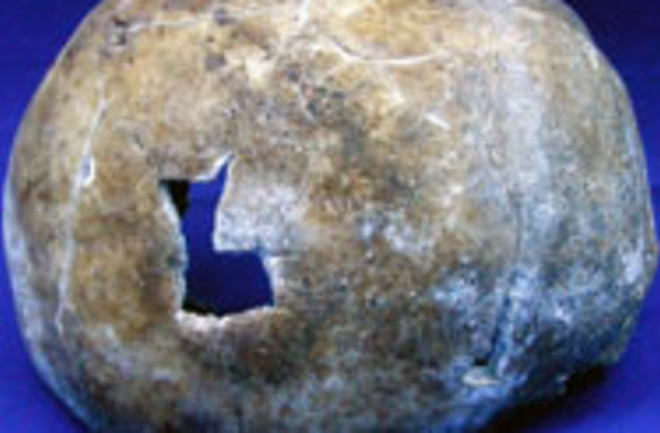 The 4,400-year-old skull of an early neurosurgery patient. | Ikiztepe archive

You might shudder at the mere thought of ancient brain surgery, but recent studies of the practice at Bronze Age sites in Turkey suggest that early neurosurgeons were surprisingly precise and that a majority of their patients may have survived.

At Ikiztepe, a small settlement near the Black Sea occupied from 3200 to 1700 B.C., archaeologist Önder Bilgi of Istanbul University has uncovered five skulls with clean, rectangular incisions that are evidence for trepanation, or basic cranial surgery. The procedure may have been performed to treat hemorrhages, brain cancer, head trauma, or mental illness. Last August Bilgi also unearthed a pair of razor-sharp volcanic glass blades that he believes were used to make the careful cuts.

There is ample evidence that Bronze Age sawbones knew what they doing. Last summer, biological anthropologist Handan üstündag of Anadolu University in Turkey excavated the 4,000-year-old trepanned skull of a man at Kultepe Höyük in central Turkey. üstündag says the surgeon cut a neat 1- by 2-inch incision, and “there are clear signs of recovery in the regrowth of bone tissue at the edges.” Judging from the frequency of healed bone in such skulls, anthropologist Yilmaz Erdal of Hacettepe University in Turkey recently proposed that about half of all Bronze Age trepanation patients—and 60 percent of those in Turkey—survived the procedure.