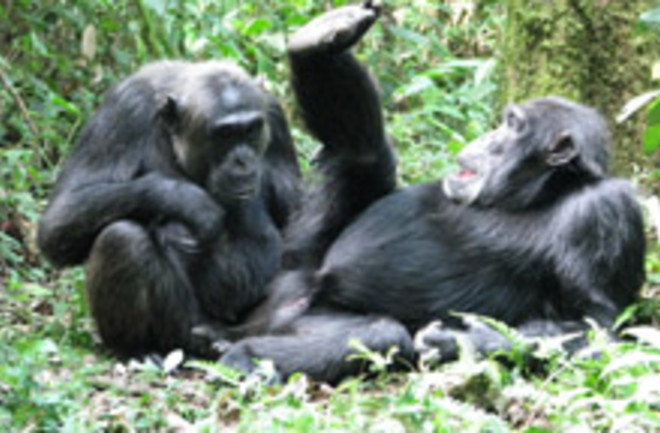 Do male chimps have BFFs? It turns out the answer is yes. Primatologists knew that male chimps formed short-term friendships, and had always assumed that these bonds might become long-term as well. Now, Michigan researchers have documented that male chimps develop close relationships with each other that can last up to seven years. For 14 years, John Mitani, a primatologist at the University of Michigan, spent his summers observing male chimps in Uganda’s Kibale National Park. Mitani and his team named the male chimps and documented their activity closely. The chimps and their best friends shared meat, groomed each other, and made sure to get each others’ backs in fights. “[The] males were more social than females, engaged in cooperative acts, and spent time competing for females,” Mitani told DISCOVER. Mitani measured the males' social bonds based on how physically close the chimps stayed to one another and how much time they spent doing activities together. Mitani also noted that male chimp friends tended to scratch each others’ backs for an equal amount of time. Most chimps had at least one best friend, but it was also common for them to have a few. Meanwhile, female chimps don’t tend to form strong bonds with other females—in East Africa, females are generally found roaming around alone or with their offspring. Primatologists still don’t know why the chimps bond, but Matini thinks it might boost their reproductive success. Matini is currently doing paternity studies, using markers to determine which chimps are fathering the most babies. Related Content: Discoblog: For Chimps, a Rear End Is Worth a Thousand Faces DISCOVER: Frans de Waal Interview 80beats: Chimp Sex Complicated DISCOVER: Primatologist Jane Goodall Dialogue Image: Courtesy of John Mitani