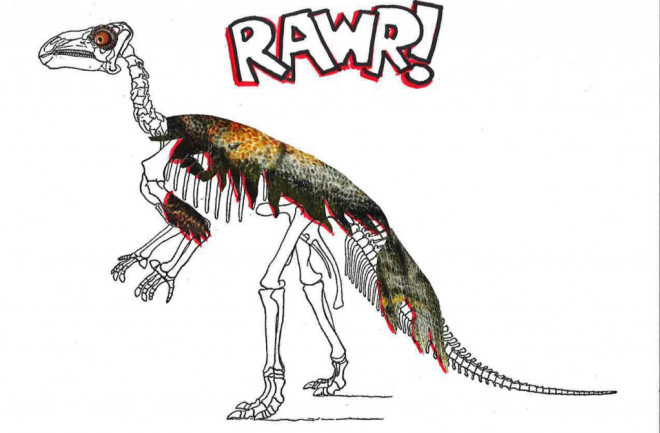 A story about finding dinosaur brains needs a zombie dinosaur in it. The fossilized brain tissue found on an English beach belonged to a close relative of Iguanodon, shown here. Note: We know dinosaurs were not anatomically capable of RAWR-ing, but they weren't zombies, either, so just lighten up. Credit: skeletal reconstruction by O.C. Marsh, 1896, zombified by Gemma Tarlach. Next time you're at the beach, idly flipping rocks and pebbles into the waves, stop. Take a good look at what you're about to toss Neptune's way. It might be a dinosaur brain. A team of researchers announced today that a clumpy-looking, mud-colored stone that could fit in the palm of your hand is actually fossilized brain tissue from a dinosaur that needed it 133 million years ago.

The fossilized brain tissue was found near the English seaside town of Bexhill. Credit: Jamie Hiscocks. While paleontologists have unearthed braincases in the past — and those fossilized skull bones are useful for studying dinobrains — this is the first time researchers have identified actual brain tissue that's been preserved in the fossil record. The fossilized brain bits appear to be from an herbivore similar to Iguanodon, one of the first dinosaurs to be scientifically described, way back in the early 19th century. Paleontology has come a long way since then: scanning electron microscopy allowed researchers analyzing the fossilized brain to identify fine capillaries, collagen structures and membranes that encased the brain in life. The team's conclusions, reported in a special publication of the Geological Society of London, came a dozen years after the "pebble" was discovered by a sharp-eyed fossil hunter, Jamie Hiscocks, while beachcombing near Bexhill, a seaside town in southern England not far from the fossiliferous Jurassic Coast. Today's special report is in honor of Oxford University paleobiologist Martin Brasier, who began work on the fossil but tragically was killed in a 2014 car accident.

How To Fossilize A Brain

The vast majority of fossils, whether dinosaur or some other, less interesting organism (like, say, a hominin), were originally bones preserved through mineralization. Soft tissue can be fossilized, but it's much more likely to be eaten or to decay into useless goo (note: not actual scientific term) before mineralization can occur. The Bexhill brain apparently beat the odds and made to the fossil stage because its original owner died in a boggy environment. When the animal shuffled off this mortal coil and tipped over, its head was likely partly submerged and even buried in swampy sediment. The highly acidic, low-oxygen environment slowed the rate of decay long enough that at least some of the tissue was mineralized. Enough of the Bexhill brain has been preserved for researchers to compare it with the noggins of modern dinosaurs, aka birds, and crocodiles, all part of the same big archosaur family tree. They found numerous similarities, but also one big question mark. For most reptiles, the actual brain fills only about half of the braincase — vascular stuff takes up the rest of the space between brain and skull. The Bexhill brain, however, was well-preserved enough to see that part of the tissue was directly against the braincase. This could mean that the dinosaur's brain filled its braincase, which in turn could mean that the dinosaur — and perhaps other cows of the Cretaceous — was smarter than a box of rocks.

The Bexhill brain tissue appears to have pressed against the top of the skull, as shown in this, ahem, cutaway detail, though researchers have yet to determine whether the position was due to gravity or braininess. Credit: University of Cambridge. The researchers cautioned, however, that before anyone goes jumping to conclusions about dino brainiacs, we should all keep in mind that the tissue could have ended up smooshed against the skull when the Bexhill beast tipped over and ended up headfirst in a bog. While we're just at the start of figuring out what this brain can tell us, the mere fact that it was found — along with other recent unexpected soft tissue dino finds — suggests the world is full of once-squishy fossils just waiting to be discovered. I know I'll be giving all the rocks some extra eyeballing the next time I'm at the beach.