Blind Cousins to the Arthropod Superstars 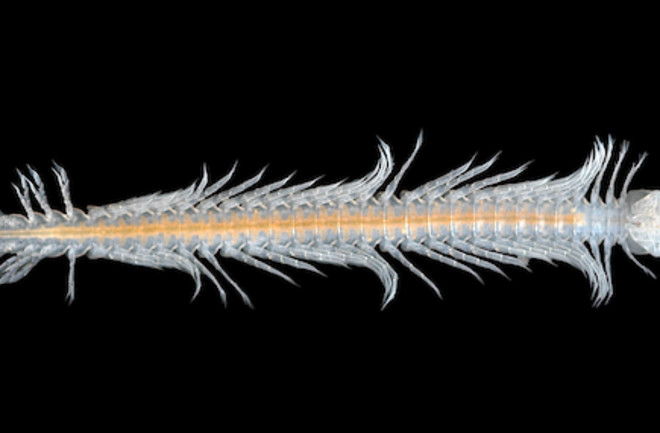 Suddenly this obscure, blind cave dweller has become extremely interesting. It turns out to be a close cousin of the most diverse group of animals on Earth, the insects. Insects--all one-million-plus-species of them--belong to a lineage of animals called arthropods. The arthropods emerged early in the history of animals, and while many of the early arthropods such as trilobites disappeared long ago, a vast diversity thrive on Earth today. Living arthropods share a number of traits in common, such as a hardened, segmented exoskeleton and compound eyes. But they've evolved into lots of different forms, ranging from scorpions to horseshoe crabs to centipedes to daddy longlegs to butterflies. They fly through the sky, plunge to the bottom of the sea, thrive in scorching deserts, and hang out in your kitchen. In order to understand how the arthropods evolved into all this diversity, scientists have labored for many decades to figure out how they are related to one another. It has been a tricky undertaking for many reasons. For one thing, different lineages of arthropods have frequently evolved the same traits independently. So just because two species have long stalk-shaped eyes doesn't mean that they share a close stalk-shaped ancestor. It's possible they might have each evolved from two separate ancestors with ordinary eyes. When scientists started to sequence DNA from arthropods, they hoped that they would be able to get a sharper picture of arthropod evolution. It has helped clear up some things. For example, for a long time scientists believed that insects were closely related to centipedes and millipedes. Along with their anatomical similarities, these two groups are also both mainly land-dwellers. But studies on DNA have pretty clearly demonstrated that, in fact, insects are closer to crustaceans like lobsters and shrimp than they are to centipedes and millipedes. So the two groups descend from two separate invasions of land. However, studies on DNA did not immediately make all the uncertainties about arthropods disappear. And there's no reason to have expected it would. DNA is not magic. It's a great repository of information about the history of life, but it's not perfect. For example, just as two insects may independently evolve stalk eyes, two lineages may evolve a similar sequence in a particular stretch of DNA. Another problem arises with groups like arthropods that blossomed very quickly into many lineages a long time ago. It's hard to tease apart the ordering of the branches, just as it's hard to tease apart distant galaxies in a telescope. So scientists have been gathering more arthropod DNA and analyzing it in new ways, in order to find strong evidence for kinships. In Nature today, a team of scientists at the University of Maryland, Duke University, and the Natural History of Museum in LA have presented a particularly massive analysis. They lined up 41,000 bases of DNA from 62 genes in 75 species spanning the diversity of arthropods. They found that a number of the branches of the tree held up under a number of different statistical tests. The tree, in all its full glory, is reproduced at the bottom of this post. In some respects, it supports a lot of traditional taxonomy. For example, everything we call an insect are closer to each other than to any arthropod not considered an insect. But there are also some intriguing surprises. The one I'll mention here is the cave-dwelling critter I mentioned at the top of the post. It's called Speleonectes tulumensis. It lives only in the pitch-black, oxygen-free waters at the bottom of deep caves in the Bahamas. It belongs to a group of arthropods, which the authors of the new study dub Xenocarida, that have mystified scientists ever since they were discovered in the 1980s. Some researchers argued that they were the most primitive of all crustaceans. Yet some xenocarids have remarkably elaborate brains. Thanks to the fact that they live at the bottom of deep caves, scientists haven't given them quite the attention they've lavished on fruit flies and honeybees and other arthropods in easier reach. According to the new study, however, they deserve the attention of anyone interested in where insects came from. That's because they are the closest living relative to the insects (along with springtails and other six-legged arthropods, the hexapods). They can therefore offer clues to what the forerunners of insects were like. Insects may not have evolved out of deep caves--it's possible that xenocarids lived in other parts of the ocean in the past but have only survived in one extreme habitat. But before there were insects, this new study suggests, the proto-insects may have looked like this. It's yet another demonstration of the knowledge that we can get even from rare, obscure species. If we had accidentally wiped out the xenocarids, no one would have ever known the important place they have in the history of this arthropod-dominated world.