Birds of a Feather Hunt Better Together 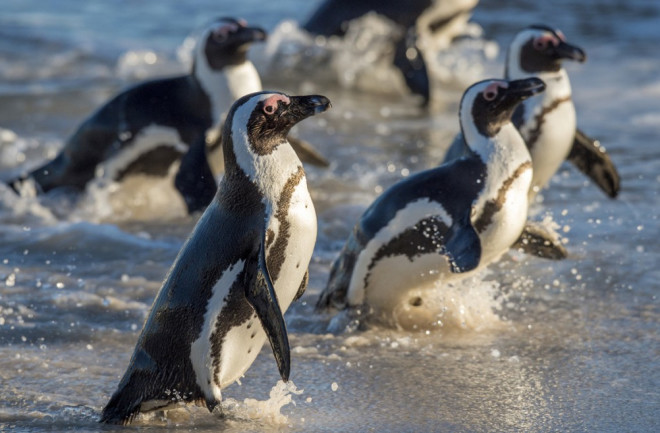 While there’s no I in TEAM, each penguin benefits from hunting together. (Credit: Sergey Uryadnikov)

They say that many hands make light work. Well, for African penguins, many beaks make for bountiful hunts, according to a new study in Royal Society Open Science. The results suggest that dwindling populations may have greater consequences than previously realized.

African penguins (Spheniscus demersus), or “jackass” penguins after their donkey-like calls, are currently endangered. Found only on the southern tip of Africa, populations of these flightless birds have dropped from an estimated 4 to 5 million in 1800 to a mere 50,000 or so animals today. Their situation is considered so dire that, if the penguins do not begin to rebound soon, it’s predicted they’ll go extinct in about a decade.

The steep decline in numbers is thought to be tied to the availability of the penguins’ food—small, schooling fishes that hang out in the open ocean just offshore. The species they hunt, including sardines and anchovies, have suffered as well from extensive purse-seine fishing, and recent oceanographic changes have caused the fishes to move eastward and further from the hungry penguins. Understanding how these birds feed could reveal management options that would best help rectify the food situation, so South African scientists decided study the foraging habits of these diving birds in the hope that it may provide the key to ensuring their continued survival.

African penguins regularly form large groups at sea, corralling small baitfishes into balls. But such behaviors require a certain mass of animals, so scientists have worried that as populations dwindle, the animals may suffer from the loss of their numbers, a phenomenon scientists refer to as an Allee effect. “However, little is known on the range of foraging strategies employed by this species and, as is the case for all penguins, there is no information on the potential benefits associated with group foraging,” the authors of the new study explain.

To get a closer look at the animals’ foraging behaviors, the scientists equipped 12 adult birds from the Stony Point colony with back-mounted cameras. The video footage allowed the scientists to record feeding events as well as hunting strategies. They could then compare how successful the animals were when they hunted alone or in groups.

These penguins get fish with a little help from their friends. Excerpt from Movie S1 from McInnes et al. 2017

As the researchers combed through nearly 14 hours of video, they watched the penguins search for food, chase down prey, and preen one another at sea. The penguins were most successful at catching fish when they worked as a team, driving schools of anchovy into tight balls near the surface (a feeding behavior often seen in dolphins). The penguins easily picked off any adventurous anchovies that attempted to break away from the school. Overall, penguins were about twice as successful when hunting as a team than by themselves, but they were only observed hunting in groups about 1/3 of the time.

The clear advantage to group hunting seen in this study underscores the importance of conservation efforts. “The facilitative benefits of group foraging as shown for penguins from Stony Point may be compromised under smaller populations,” the authors explain, suggesting the animals may indeed already be suffering from Allee effects. “Historically, at a time when populations were significantly larger than today, the majority of African penguins recorded at sea were in groups,” so the infrequency of group hunting observed may be because populations are already too small — “a reflection of sub-optimal conditions.”

“The findings of this research reinforce the need to prevent further population declines of African penguins, which could partly be achieved through the sustainable management of schooling prey resources around penguin breeding colonies,” the authors conclude.