Birds Can Whiff a Winner of a Mate 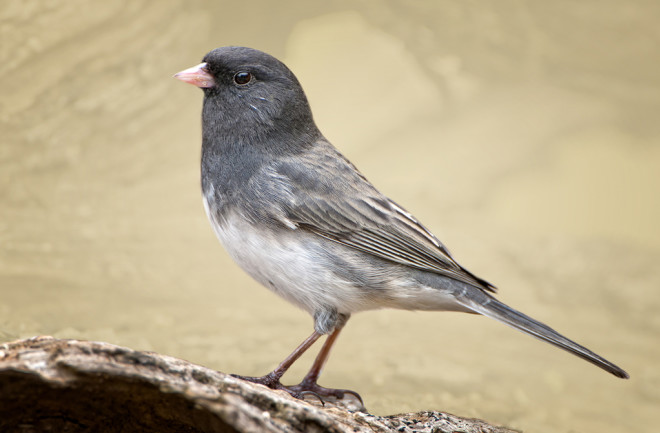 Take a look at this dashing dandy (i.e. dark-eyed junco). Image credit: Bonnie Taylor Barry/Shutterstock In breaking avian-aphrodisiacal news, researchers have found that a bird’s scent has a lot to do with how successfully — and with whom — it mates. While most animals rely on smell as the primary sexual signal in finding a partner, scientists have held for years that birds were all stuffed up when it came to odor-related romance, believing their attraction to be based instead on traits like size, song and plumage. But researchers at Michigan State University demonstrated that odor can reliably predict reproductive success among some birds---both who those birds jump in the nest with and how many offspring they produce. The team, led by Danielle Whittaker, examined the preen oil of dark-eyed juncos, a species ofNorth American songbird. Preen oil is secreted by a gland near the tail; the bird rubs its head and bill in the gland and then spreads the oil all over its body, a behavior thought to maintain and strengthen the feathers (while also achieving an ultra-cool, slicked-back coif). The study published in the current issue of Animal Behaviour shows thatthe preen oil actually does a double duty. First, aromatic volatile compounds contained within the oilcan indicate a bird’s fertility. And two, for males, specifically, the volatiles hint at how paternal they’ll be or even if they’re likely to be cuckolded (i.e. male birds that get stuck raising baby birds that aren’t biologically their own). Whittaker found that males with more male-like scent and females with more female-like scent were predictably more prolific. She calls the results “very intuitive,” but says she was “a little surprised at the strength of the correlation.” It turns out female dark-eyed juncos in the study weren’t just sniffing out a mate, they were also trying to find a good father. Whittaker reported that females would often use odor to select a particularly masculine mate, because males with more “male-like” compounds tended to have more surviving offspring and were also more successful at raising the nestlings to fledglings. In contrast, Whittaker found that those males with a higher abundance of “female-like” compounds in their preen oil (those that smelled like the ladies) lost more paternity, as the offspring in their home nests were more likely to have been sired by another male. It’s far too early to know if the findings extend beyond juncos to cuckolded cockatoos, much less people. But, Whittaker says, “there is an interesting parallel between birds and humans here” because neither has functional vomeronasal organs---that is, both possess smaller olfactory gene repertoires than other scent-dependent mammals so they rely primarily on visual and acoustic communication. While the prevailing scientific belief is that odor does not play a large role in sexual behavior for birds or humans – disregarding the deodorant-eschewing or Axe-body-spray-wearing outliers – Whittaker says that notion could change. “As we are learning that this assumption is incorrect in birds,” she says, “I would expect that we may begin re-examining our assumptions about humans as well.”