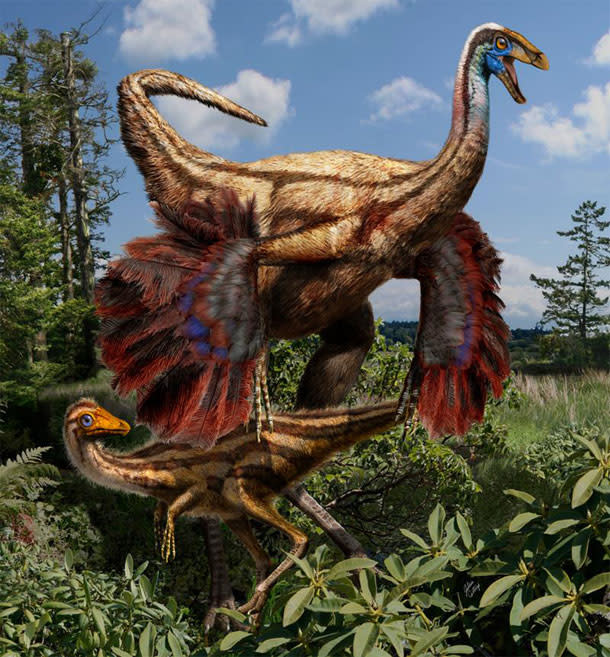 In 1890, the fossil-hunter Othniel Charles Marsh described a new species of dinosaur from Colorado. He only had a foot and part of a hand to go on, but they were so bird-like that Marsh called the beast

– the bird mimic. As the rest of Ornithomimus’ skeleton was later discovered, Marsh’s description seemed more and more apt. It ran on two legs, and had a beaked, toothless mouth. Despite the long tail and grasping arms, it vaguely resembled an ostrich, and it lent its name to an entire family – the ornithomimids—which are colloquially known as “ostrich dinosaurs”. Now, the bird mimic has become even more bird-like. By analysing two new specimens, and poring over an old famous one, Darla Zelenitsky from the University of Calgary has found evidence that Ornithomimus had feathers. And not just simple filaments, but wings – fans of long feathers splaying from the arms of adults. (More technically, it had “pennibrachia” – a word for wing-like arms that couldn’t be used to glide or fly.) The two new specimens were found in 2008 and 2009 by Frank Hadfield, a local businessman from Drumheller, Alberta. He sent them to the local Royal Tyrrell Museum of Palaeontology, where Zelenitsky examined them. One is a juvenile, around one year old, with a dense coat of short hollow filaments on its trunk and limbs. The second is an adult that’s missing its arms; it too had the same filaments on its neck, back and upper body. Each filament measures up to 5 centimetres long and half a centimetre wide. These represent the earliest stage of feather evolution—they’re known as proto-feathers or, more evocatively, dino-fuzz. 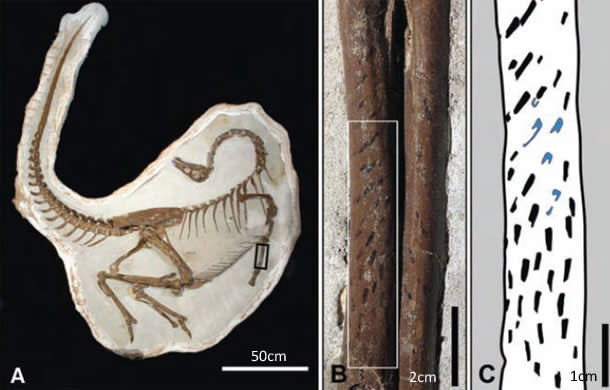 The third Ornithomimus is a classic, an almost complete skeleton that was found in 1995, and also lives in the Royal Tyrell Museum. When Zelenitsky examined its arms, she noticed around 70 short straight carbon-black strokes. She thinks this adult had pennibrachia, and the traces represent the rigid shafts in the middle of its feathers. The strokes have the right size, shape and position. They’re only found on the back edge of one of the two forearm bones, and their angles gradually change down the arm. If you looked at the wing of a modern bird, you’d see exactly the same pattern of feather attachments. “These are absolutely fascinating discoveries,” says Xing Xu, who has discovered more feathered dinosaurs than anyone else. Xu expected that sophisticated feathers would first have appeared on the arms and tail, and “here is the evidence”. Simple fuzzy filaments have been found all over the dinosaur family , leading some scientists to suggest that they appeared very early in the group’s history. But until now, pennibrachia and wings, with their more complex feathers, were more exclusive. They had only been found in the maniraptorans – the small predators that were most closely related to birds (see the bottom four rows of the diagram below). But Ornithomimus belonged to a group that appeared much earlier. If it had pennibrachia, these structures must have been older innovations than we thought. “They fill a significant gap in the record of fossil feathers,” says Zelenitsky. “This is the earliest and most primitive occurrence of wings in that group of dinosaurs that led to birds.”

was a relatively big dinosaur, four metres long from nose to tail, and around 170 kilograms in weight. There was no way it could have flown. This implies, as Zelenitsky says, that “wings didn’t initially evolve for flight”. Nor is it likely that wings evolved to give predators better balance as they latched onto their prey. Instead, Zelenitsky thinks that the first winged dinosaurs used their long feathers for courtship or display. The fact that the juvenile Ornithomimus didn’t have pennibranchia, but the adult did, supports her idea. These feathery fans only developed as the animal got older and was ready to mate. The same structures eventually evolved into the flight-capable wings of the maniraptorans. It certainly looks like we’re living in the golden age of feathered dinosaur discovery. Since 1996, more than 30 plumed species have been identified, including giant tyrants, glossy four-winged gliders, and even (stretching the imagination a bit) a squirrel mimic. It’s now clear that if you travelled back in time to the Cretaceous, you’d have sat in a world replete with feathers, from simple fuzzy filaments to proper flight-capable plumage. Zelenitsky hasn’t just ushered Ornithomimus into the feather club—she has provided a tantalising hint that the best discoveries are yet to come. First, if she had just looked at the first two specimens, she wouldn’t have known that adult Ornithomimus had primitive wings. This discovery and others suggest that some dinosaurs had plumes that changed over their lives. Maybe other species with similarly fuzzy coverings also had more dramatic structures waiting to be found. On top of that, Zelenitsky’s specimens were all found among coarse-grained river deposits in Canada. But almost all other feathered dinosaurs have been recovered from fine-grained lake sediments, and most of them from China. “It is just great to see feathered dinosaur fossils have been discovered in more places besides China,” says Xu. And river deposits, are “by far the largest producer of dinosaur specimens worldwide”, according to Zelenitsky. “There might be a lot of potential for finding feathered dinosaurs worldwide, not in northern China.” 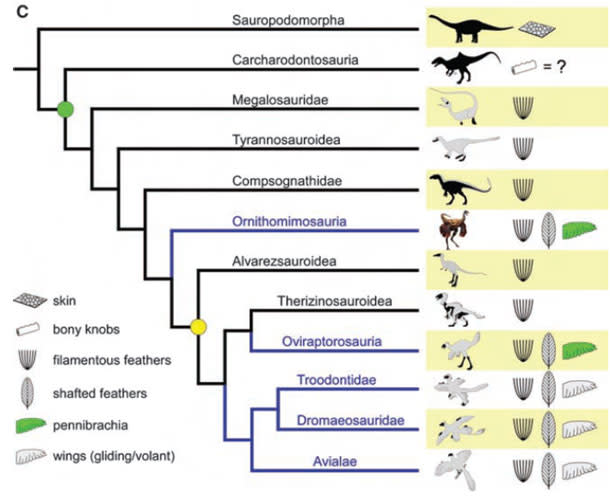 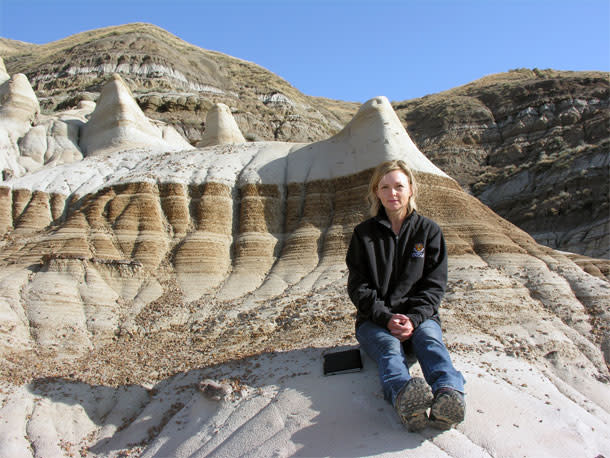