Bird-brained jays can plan for the future

Looking at Britain's overcrowded prisons, Wembley stadium or the continual dithering over solid climate change policies, it would seem that many of us are really quite bad at planning for the future. Even so, most of us can still do it (even though some may do it very badly). This abilty isn't there from birth; children only develop a sense of a future at the age of two and they can only plan for it from four or five. But eventually, everyone picks up the skill and up till recently, scientists believed that we were the only species that did. 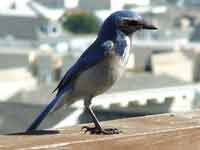 Many animals show behaviour that could be generously explained by future planning. Birds will often migrate to warmer climates, and bears will hibernate in advance of winter famines. But the world of modern biology resists casual anthropomorphism at all costs. Both animals and the scientists who study them) must work harder to prove themselves. Migrating birds or hibernating bears are not necessarily thinking ahead; they are most likely reacting to signals in the present that tell them the seasons are about to change. Their responses are instinctive.

To show true planning, an animal must do more than follow pre-programmed drives; they must anticipate their future desires and show new planned behaviours in response. Caroline Raby and colleagues from the University of Cambridge showed that a simple bird-brain - the beautiful Western scrub jay (Aphelocoma californica) - does just that. Jays store food in hiding places or 'caches' for times when food is scarce, and Raby's studies suggest that this is more than an instinct that says: "Bury food when cold."

She housed eight jays in large cages with three adjacent rooms - two end ones that opened onto a middle section. Every evening, the birds were fed with powdered pine nuts - tasty, but useless for storing. They went without food overnight, and in the morning, they were transferred to one of the end rooms for two hours. One of these, the 'breakfast room', always contained food while the other, the 'non-breakfast' room never did. 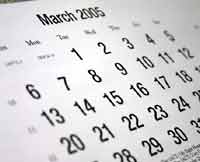 After three mornings spent in each room, the jays were finally given whole pine nuts, which they could store in sand-filled trays in either of the end compartments. The resourceful jays anticipated their hunger the following morning and stored three times as many nuts in the 'non-breakfast' room as the 'breakfast' one.

Raby was still not convinced. She reasoned that the jays might favour the 'non-breakfast' room because they learned to associate it with hunger. They needed to pass a harder test. She repeated her previous experiment, with a small twist. This time, the jays were fed every morning, but with different food. They were given peanuts in one room and dog kibble in the other.

When the jays were given the chance to store their meals, they did so evenly, so that each room contained some of the food it normally lacked. They not only ensured that they would be well-fed in the morning, they gave themselves a varied meal too.

Earlier experiments with scrub jays showed that they have a powerful ability to recall past events, as well as anticipate those to come. Their memory helps them to remember what they stored, where and when they did it, and even whether other birds were watching. This allows them to uncover different types of food while they are fresh, and to return earlier to protect their hoards from voyeuristic thieves.

Human studies suggest that the same brain processes govern any sort of mental time travel - both in the future and the past. Now, Raby's work shows that jays share this ability. While we will never be able to ask the jays what they are thinking, elegant experiments like these bring us a step closer to understanding the mental abilities of animals. And what we are finding is gradually eroding our intellectual arrogance. When it comes to advanced thought, it seems that we are not alone.