Biology as a historical parameter

In my review of Replenishing the Earth: The Settler Revolution and the Rise of the Angloworld, 1783-1939 I left one aspect of James Belich's thesis out of my list of criticisms because it wasn't relevant to most of the argument. He seems to reject, mostly based on incredulity, the idea that there were massive population collapses in the New World when the natives encountered diseases incubated on the World Island (I say "World Island" because it wasn't only Eurasian diseases, African slaves brought their own suite of lethal ailments which "cleared out" Amerindians from many lowland zones). He points out, correctly, that the Black Death in Europe is estimated to have resulted in a decrease of only ~1/3 from the total population. How then could it be plausible that there may have been population contractions on the order of a magnitude (i.e., the post-collapse population being only ~10% of the pre-collapse population). The skepticism of extreme population decline on the part of indigenes dovetails with the author's focus on the particular explosiveness of Anglo natural increase, as well as migratory bursts. Heightening the "contrast effect" at the heart of his central thesis. I think the author's incredulity only makes sense in light of biological naivete. To a first approximation moderns tend to assume that all populations are interchangeable in our models. Like the economist ignoring individual differences and fixating on H. economicus for analytical purposes this has some utility, but it does miss much of the picture. The Black Death was only one of many epidemics which swept over Europe, so one can presume that European populations were already somewhat robust in the face of a new strain of infectious disease. The revisionist scholarship, which posits mass population collapse, is thoroughly reviewed in Charles C. Mann's 1491: New Revelations of the Americas Before Columbus. But even today biological differences matter when it comes to disease, for example in relation to swine flu fatalities. One of the implicit aspects of Belich's skepticism is that population crash models in the New World are rooted in inferences, not concrete censuses. But I recently stumbled onto a "test case" for contact between Europeans and indigenous people where we have some good data sets, Tahiti. 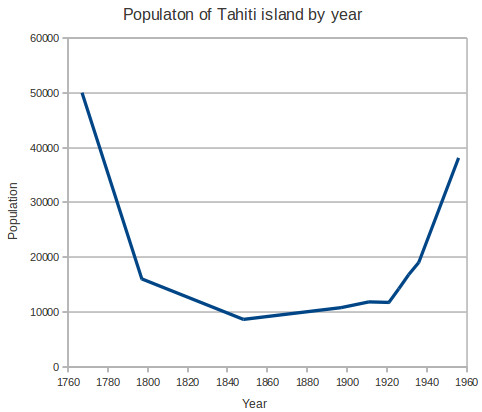 The initial data point of ~50,000 in 1767 is a low boundary estimate. But the subsequent data points are more concrete, from missionary surveys, or censuses. Even excluding the estimate the pre-contact population of Tahiti island seems to have dropped by one half in a two generation period. This is greater than the average decrease of the Black Death in Europe. I think the reason for these massive population collapses when isolated groups meet more cosmopolitan ones is simple: they compress many generations of natural selection and immunity acquisition into just a few. In the historical record we know that the 2nd century A.D. witnessed the outbreak of plagues in the Roman Empire, and the subsequent decline and fall was concomitant with the endemic status of malaria in the Italian lowlands. The great Plague of Justinian in the late 6th century has been fingered as the causal factor behind the rise of Islam, the replacement of Celtic Britons by Anglo-Saxons, and the end of the Classical World more generally. Populations isolated from the grinding pathologies of Malthusian agricultural interlude just experienced it in all its glorious misery in a very short burst. Source: Urbanization in French Polynesia, RC Schmitt, 1962