Beetle walks and sticks underwater by creating dryness with every footstep 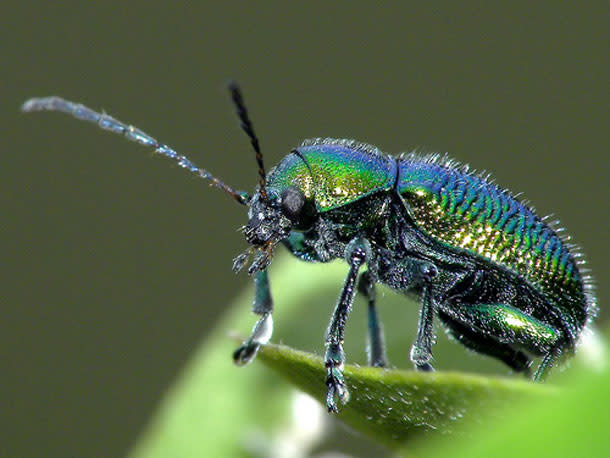 Sticking to surfaces and walking up walls are so commonplace among insects that they risk becoming boring. But the green dock beetle has a fresh twist on this tired trick: it can stick to surfaces underwater. The secret to its aquatic stride is a set of small bubbles trapped beneath its feet. This insect can plod along underwater by literally walking on air. The green dock beetle (Gastrophysa viridula) is a gorgeous European resident with a metallic green shell, occasionally streaked with rainbow hues. It canwalk on flat surfaces thanks to thousands of hairs on the claws of their feet, which fit into the microscopic nooks and crannies of whatever’s underfoot. Most beetles have the same ability, and some boost the adhesive power of their hairs by secreting a sticky oil onto them. These adaptations work well enough in dry conditions, but they ought to fail on wet surfaces. Water molecules should interfere with the hairs’ close contact, and disrupt the adhesive power of the oil. “People believed that beetles have no ability to walk under water,” says Naoe Hosoda from the National Institute for Material Science in Tuskuba, Japan. They were clearly wrong. Together with Stanislav Gorb from the Zoological Institute at the University of Kiel, Germany, she clearly showed that the green dock beetle has no problems walking underwater. The duo captured 29 wild beetles, and allowed them to walk off a stick onto the bottom of a water bath. Once there, they kept on walking.

It’s not that the beetles are heavy – in fact, they’re naturally buoyant. If you drop them in water, they’ll float. But once they touch the bottom, they can walk around very easily. Their footsteps aren’t precarious ones, either. While they don’t walk quite as easily underwater as they do on land, they can still produce a fair amount of force. (Hosoda and Gorb discovered as much by harnessing the beetles to a force meter using a human hair and a small dollop of beeswax, and measuring how hard they could pull.) The beetle’s solution is to create dryness with every footfall. As it submerges, it traps bubbles of air within the hairs of its feet, and holds them there securely. The bubbles displace the water below the beetle’s foot, creating a tiny dry patch and allowing the oily hairs to stick as well they do on dry land. The image below illustrates that – it’s a shot of the beetle’s footstep, taken from below with a microscope. The white area is the air bubble, and the black dots are the beetle’s hairs pressing down against the surface. 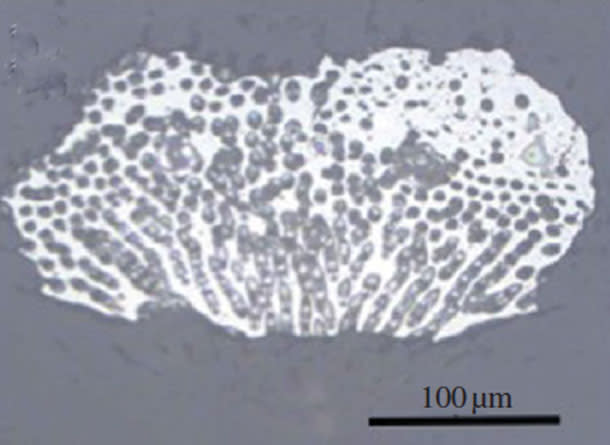 The bubbles are critically important. When Hosoda and Gorb disrupted them by adding a small amount of detergent to the water, the beetles immediately lost their footing and floated to the surface. Hosoda started studying the beetle because he wants to design environmentally friendly materials that can repeatedly stick to surfaces and peel off again, without the use of any glues. The beetle’s underwater footsteps are a perfect example. Of course, they use an oil to help them stick, but Hosoda found that this isn’t necessary. She and Gorb duplicated the beetle’s trick, by creating a silicone plate with small pillars that could trap their own air bubbles. This artificial “beetle foot” managed to stick to the bottom of the water bath just like the real deal. Once again, the bubbles were crucial. If the plate had no pillars, and therefore no bubbles, it wouldn’t stick. And the bigger the trapped bubbles, the more force it took to pull the plate off the bottom. And for their final trick, Hosoda and Gorb attached the same structures to the bottom of yellow toy bulldozer, transforming it into something that’s a bit like a hovercraft. It stuck to the bottom and walls of the water tank using its beetle-inspired air cushion. Perhaps the same techniques could be used to stabilise underwater machines. Reference: Hosoda & Gorb. 2012. Underwater locomotion in a terrestrial beetle: combination of surface de-wetting and capillary forces. Proc Roy Soc B http://dx.doi.org/10.1098/rspb.2012.1297Images from Charles Lam (top) and Hosoda & Gorb (others)