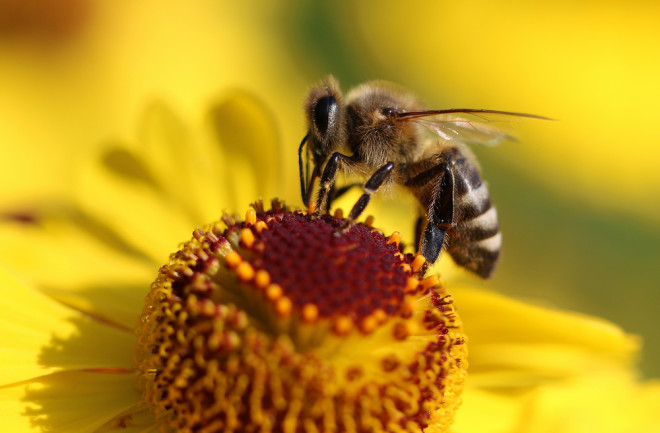 (Credit: Viesturs Ozolins/Shutterstock) We like to think, as humans, that our big brains separate us from the animals. Sure, we’re basically mobile meat just like them, but we can think. But the more we’ve learned about the other species out there, the more brainpower we’ve detected too. Not only can some animals be trained and do tricks, but a few can communicate and even do simple math. An elite club can even understand the concept of zero, embodied nothingness: various primates, the African grey parrot, and even preschool kids. Now, according to a Science paper out today, honey bees have joined the club. (Contain your shock, Nic Cage!)

We already knew the apian insects were smart, as Andreas Nieder points out in a related Science Perspective: “They possess elaborate short-term memory to consider upcoming decisions, understand abstract concepts such as same-ness and difference, and learn intricate skills from other bees. Bees can also estimate the number of up to four objects.” But zero is particularly tricky. It took our own species centuries to fully grapple with the concept of nothingness and how to represent it. Understanding that an empty basket contains zero apples, and that it’s a comparable concept to 3 apples, requires some serious mathematical competence But honey bees get it! In their experiments, the paper’s authors first taught bees the concept of greater than/less than — already pretty impressive. They set up two white squares with black “elements” (squares, dots, etc) and gave bees sugary rewards for choosing the correct ones to land on: “greater than”-trained bees on the square with more elements, “less than”-trained bees on the square with fewer. Makes sense, right? Once the bees got good at that, though, the real magic happened. The scientists put up two boards as usual, but one of them was blank, symbolizing zero elements. Would the bees understand this as another number, and see it as less than the other numbers? It turns out, they did!

One last neat detail: As the bees’ numerical options became more stark — choosing between 0 and 5, say, instead of 0 and 1 — the bees became more accurate. That’s also true for humans! Something about the bees’ brains, with under a million neurons each, must interpret numbers the same way as our human brains, with their 86,000 million neurons. “It constitutes a fascinating case of convergent evolution of numerical competence,” writes Nieder, who suggests studying the underlying evolution making it possible. “We have only just begun to zoom in on ‘nothing’ as a relevant quantitative concept for the brain.” It’s just one more way our powerful human intellect turns out not to be unique among the animal kingdom after all. Which, in a way, is the more exciting alternative.