Bees Kill Hornets by Suffocating Them… Unless They Don’t…

New Scientist recently ran an interesting article about Greek scientists who say that Cyprian honeybees can kill an attacking hornet by suffocating it: "they will instantly form a lemon-sized ball of about 150-300 bees to engulf any hornet that ventures too close to the entrance," thereby choking off the much larger insect's oxygen. But there's a big hole in the researchers' theory. 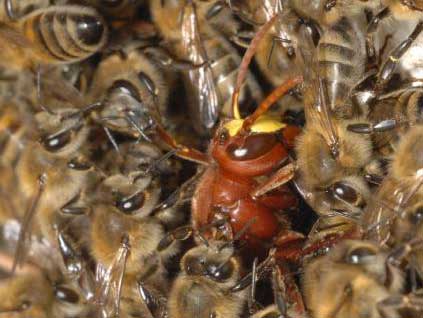 The closely related Japanese honeybee swarms hornets in a similar way, killing by a totally different mechanism: the center of its lemon-sized bee ball heats up to 50 degrees Celsius, baking an offending hornet to death. Researchers discovered this in the mid-1990s using thermal imaging equipment. Makes sense. So how did the Greek researchers find out how the Cyprian honeybees finish off hornets? "By a process of elimination," says New Scientist. Uh, does that really count? What if there's some mechanism that the researchers haven't thought about or can't detect?