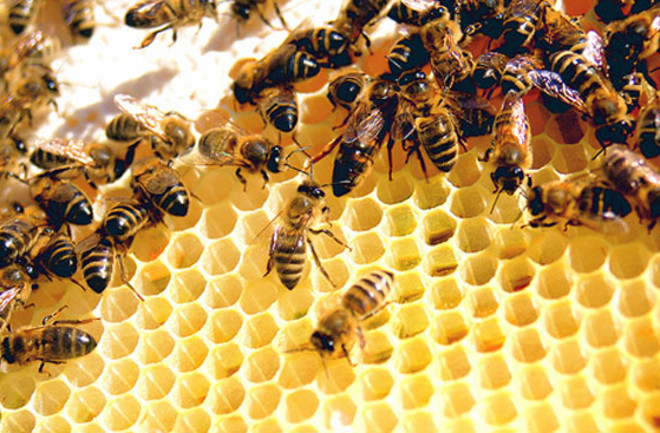 This spring, many beekeepers across America opened their hives and found ruin within. At a time when they should have been buzzing with activity, the hives were half-empty, with most adult bees having flown off to die. A new federal survey indicates that 2010 has been the worst year so far for bee deaths. Another study suggests that pesticides might be to blame for the mass wipeout of adult honeybees. This winter's die-off was the continuation of a four-year trend. At any given point, beekeepers can expect to see 15 to 20 percent of their bees wiped out due to natural causes or harsh weather. But this alarming phenomenon, termed colony collapse disorder (CCD), has seen millions of bees perish in a mysterious epidemic, with some farmers losing 30 to 90 percent of their hives. As for the cause of this epidemic, experts say their best guess is that many factors are combining to sicken bees, with the list of culprits including parasites, viruses, bacteria, poor nutrition, and pesticides. Now a new study published in the scientific journal PLoS ONE strengthens the case for pesticides' culpability. In the study, researchers

found about three out of five pollen and wax samples from 23 states had at least one systemic pesticide — a chemical designed to spread throughout all parts of a plant [AP].

The scientists say that in the 887 wax, pollen, bee, and hive samples, they found 121 different types of pesticides. The pesticides weren’t present in sufficient quantities to kill the bees, they say, but when combined with the other detrimental factors the mix could prove lethal for the tiny workers. This is the fourth year of honey bee losses across the United States. In 2007, the nation's beekeepers

With the official 2010 numbers (which will be announced in April) expected to be even worse, farmers across the United States are worried.

About one-third of the human diet is from plants that require pollination from honeybees, which means everything from apples to zucchini [AP].

Almond growers in California are particularly concerned; the state is one of the largest producers of almonds in the world, and with the decline in the bee population, pollinating the trees has been a challenge. CCD has also dealt a tough economic blow to the beekeepers who truck their hives to the orchards. For Zac Browning,

one of the country's largest commercial beekeepers, the latest woes have led to a $1 million loss this year [AP].

As federal, state, and private agencies hunt for the elusive bee killer, the USDA has advised people not to use pesticides indiscriminately—especially at midday when honey bees are most likely out foraging for nectar. The agency is also asking people to plant and encourage the planting of good nectar sources like red clover, foxglove, bee balm, and joe-pye weed to give the besieged honey bees a boost. Related Content: 80beats: Honeybee Murder Mystery: “We Found the Bullet Hole,” Not the “Smoking Gun” 80beats: Are Reports of a Global Honeybee Crisis Overblown? 80beats: Honeybee Killer Still at Large DISCOVER: The Baffling Bee Die-Off Continues DISCOVER: Beepocalypse