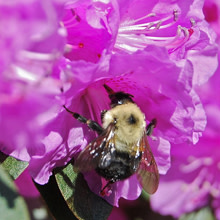 Don't you forget about bumblebees. While DISCOVER and others have extensively covered the mysterious colony collapse disorder that's been crashing honeybee populations around the world, bumblebees have not escaped the tide of doom. Sydney Cameron leads a team that just published a new study of bumblebees in this week's Proceedings of the National Academy of Sciences, and tallied up some scary numbers.

The relative abundance of four species of bumble bees over the past few decades has dropped by more than 90%—and those disappearing species are also suffering from low genetic diversity, which makes them that much more susceptible to disease or any other environmental pressures. [TIME]

In addition, the geographic ranges of those species shrunk precipitously—between 23 and 87 percent, depending upon the case. That reduction in range could have catastrophic impacts on agriculture:

Bees in general pollinate some 90% of the world's commercial plants, including most fruits, vegetables and nuts. Coffee, soya beans and cotton are all dependent on pollination by bees to increase yields. It is the start of a food chain that also sustains wild birds and animals. [The Guardian]

And bumblebees—though less celebrated than honeybees—have their specific part to play in this, Cameron explains.

"The 50 species (of bumblebees) in the United States are traditionally associated with prairies and with high alpine vegetations," she added. "Just as important -- they land on a flower and they have this behavior called buzz pollination that enables them to cause pollen to fly off the flower." This is the way to pollinate tomatoes, Cameron said -- although smaller bees can accomplish the same effect if enough cluster on a single flower. [ABC News]

Cameron's study is one of the first to document the bumblebee's plight in America in such detail. The team sampled nearly 400 sites across 40 states over the course of three years; the scientists then compared their observed data to historical bumblebee data in tens of thousands of museum records. The bad news in their results agrees with a study from December

, which found that pollen could spread damaging bee viruses not only from population to population, but from bee species to bee species. In the bumblebees' case, it might be a transplanted parasite from Europe that's causing them trouble.

Cameron and her colleagues note the possible role of a parasite called Nosema bombi that commonly found in Europe but which hasn't been fully studied among North American bumble bees. It's not a smoking gun, but the PNAS paper found that declining populations of bumble bee species were associated with high levels of parasite infection, while stable species were less likely to show frequent infection. Still, the authors write that the parasite could simply be more common in species that are declining—correlative, rather than causative. [TIME]

80beats: Uh Oh: Pollen Can Spread Viruses From Domesticated Bees to Wild Ones

80beats: “Science Is Cool And Fun”: 8-Year-Old Kids Get Their Bee Study Published

80beats: Bee Collapse May Be Caused by a Virus-Fungus One-Two Punch

80beats: How Ancient Beekeepers Made Israel the Land of (Milk and) Honey: Imported Bees