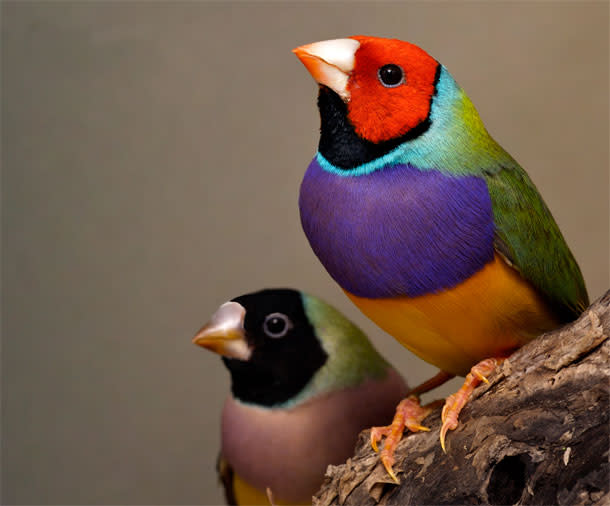 It’s said that beauty is in the eye of the beholder, but that’s only half-true for the Gouldian finch. Jennifer Templeton from Knox College, Illinois has found that these beautiful birds only display their famous fussiness over mates if they’re looking with their right eye. If the right is shut, and the left eye is open, the birds have more catholic tastes. As Templeton writes, “Beauty, therefore, is in the right eye of the beholder for these songbirds.”

The Gouldian finch, found in northern Australia, looks like a bird painted by Gauguin. Its palette includes a purple chest, yellow belly, green wings and cyan highlights. But it’s the head that really matters. They come in red or black (there’s a very rare yellow variant too, but we can ignore that here), and they strongly prefer to mate with partners of their own colours. This isn’t abstract fussiness – genetic incompatibilities between the black-heads and red-heads mean that their offspring are often infertile and feeble. Indeed, these two variants could be well on the way to becoming separate species. Red and black finches are so easy to tell apart that scientists could be forgiven for neglecting how they do so. But Templeton suspected that the act of choosing a mate was more complicated that anyone had thought. Another type of finch – the zebra finch – provided a clue. The males prefer to watch their intended females with their right eye. The right eye feeds information to the left half of the bird’s brain, and there the asymmetries continue. Genes that are switched on when neurons fire tend to be more active in the left half of a courting zebra finch’s brain than the right half. Maybe the left brain, and thus the right eye, dominates the selection of mates. Templeton tested this idea with Gouldian finches. She covered the left or right eyes of black males (who show the strongest preferences for their own colours) and presented them with a choice of potential mates. If they could see through both eyes, or just the right one, they spent more time staring at black females than other finches. If they could only see through their left eye, this preference disappeared. Likewise, males were more likely to serenade black females, but only if they could see with their right eye. There are many examples of “lateralised” mental skills – those that are dominated by one half of the brain (although beware silly right-brain-left-brain myths

). But this is the first example of a lateralisation of mate choice. “No one has documented this bias in Gouldian Finches before because it is very difficult to observe biased eye use in wild birds,” says Templeton. Other scientists have suggested that in many birds, the left half of the brain may be better at distinguishing between members of the same species. By favouring their right eye, it’s possible that the Gouldian finches make better decisions about whom to mate with – decisions that can have a dramatic impact on the fate of their descendants. But Leah Williams

from Liverpool John Moores University, who studies Gouldian finches, would like to have seen the same study done with red males too. In her previous work, she showed that the two types behave differently

– the black finches are bolder and take more risks while the red ones are more aggressive. “It would also be interesting to see if females have this visual mate choice lateralization,” Williams adds. Females choose males based on traits such as the vibrancy of their blue collars, and the length of their tails. Perhaps they also favour one eye when assessing these traits. Reference: Templeton, Mountjoy, Pryke & Griffith. 2012. In the eye of the beholder: visual mate choice lateralization in a polymorphic songbird. Biology Letters Imageby Sarah Pryke More on Gouldian finches: Unattractive partners are stressful for choosy birds