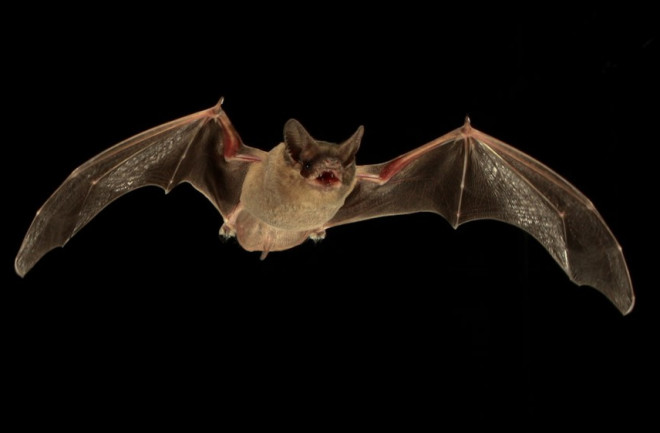 At home in the cave, bats may live in one big happy colony; but when it comes to mealtime, friends quickly become rivals. Bats rely on echolocation — sending out calls and listening for echoes — to track down their prey.

Just before nabbing their meal, bats send out a series of rapid chirps to home in on their target. But a new study reports that sometimes they're thwarted: other hungry bats nearby can send out ultrasonic jamming signals to confound their colony-mates’ targeting system and steal the meal for themselves.

Mexican free-tailed bats, Tadarida brasiliensis, are already known to use 15 different vocalizations to communicate with their comrades. However, study author Aaron Corcoran first detected a peculiar vocalization during an earlier study in Arizona, which he thought bats could be using to compete with others.

To determine how bats used this radar-jamming technique, Corocran’s team set up cameras and ultrasonic microphones to record bats’ sounds and behavior as they hunted in Arizona and New Mexico.

In a second experiment, they played a prerecorded jamming call to see if it disrupted bats' hunting success rate. When they listened and watched what they collected, they found that individual bats’ chirps were widely spaced out as they hunted for prey. Once the bat identified a target, it sent out chirps more and more rapidly as it got closer to its meal — kind of like the torpedo scene in “The Hunt for Red October.”

Researchers discovered that those rapid chirps are a big signal for competing bats in the hunting colony. When other bats hear this telltale sequence, they swoop in and send out the jamming signal. The signal is a sort of whirring blanket of sound that fills the dead air between chirps, making it more difficult for the hunting bat to gauge the prey's location. If the jam is successful, the hunter fails to get their meal, leaving it up for grabs for the saboteur.

Below, a bat's hunt is spoiled when researchers play a prerecorded jamming signal (a tethered moth is the tiny white speck, and the jamming signal sounds like an old engine attempting to start).

In all, researchers report this week in Science, they caught 145 bat-insect attacks on camera, and 86 percent of those attacks failed when a jamming call was sent out.

Researchers also tested the jamming call in a controlled environment using a tethered moth as bait. When bats would approach, researchers played a prerecorded version of the jamming call. The bats’ kill rate dropped by 75 percent compared to hunts with no interference.

Most of this sound is outside the range of human hearing, of course, so we can't even hear the ruckus. But when it comes to hunting it seems, the loudest bat gets the moth.