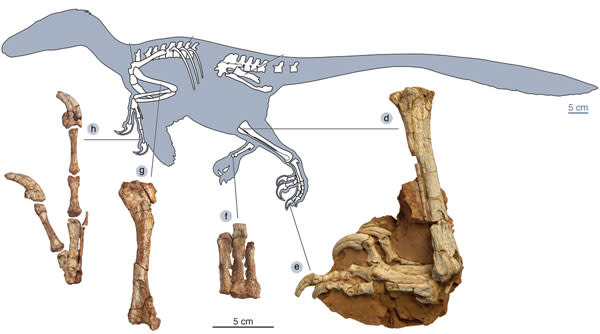 The “killing claw” of Velociraptor has been a fixture of popular imagination ever since it tapped its way across a kitchen floor in Jurassic Park. But if Velociraptor became iconic, then its close relative Balaur should be doubly so; this newly discovered dinosaur had two sickle-shaped claws on each foot. And unlike the lithe, agile form of its cousin, Balaur was built for strength, with the build of a kickboxer rather than a sprinter. Balaurbondoc was discovered in Romania by Zoltán Csiki from the University of Bucharest and in Romanian, its name means “stocky dragon”. It lived in the late Cretaceous period. Back then, Europe was a fragmented series of islands rather than a solid landmass. The strange body of Balaur – very different to those of other raptors (or dromaeosaurids) – is testament to the fact that islands have always been great places for natural selection to try out some wacky stuff. Cut off in a world of their own, island species face different evolutionary pressures to their relatives on the mainland. As such, islands are a hotbed for the bizarre and unique, the small and the giant. The Galapagos islands, for example, are home to flightless cormorants, marine iguanas and giant tortoises. In recent years, several dwarf plant-eating dinosaurs have been discovered in Romania, cementing a century-old idea initially proposed by the Hungarian adventurer Baron Franz Nopsca. Many of the species were half the size of their relatives elsewhere; Magyarosaurus, for example, was one of the thundering sauropods but it was no taller than a human. But on this island of dwarf dinos, Balaur was an exception. It’s one of the best examples – living or extinct – of the “island effect” shaping the body of a predator in unusual ways. While weird bodies are the norm for island-dwelling plant-eaters, meat-eaters tend to be just bigger or smaller versions of their mainland relatives. Balaur may be bigger but it’s very different too. So far, Csiki has only found part of the animal’s skeleton but these fragments are enough to show that Balaur was a feast of odd features. For a start, many of its wrist and hand bones had fused together and one of its fingers was unusually stunted. This wasn’t a predator that could easily grasp its prey. Instead, its main weapons were its legs. Many of its leg and foot bones had fused together too and their short, stocky shape would have made them very shock-resistant. This animal probably didn’t have the speed or agility of its smaller relatives. What it did have was strength. Its barrel-shaped torso had large hips with powerful leg muscles. With these, it could lash out with a forceful kick, attacking prey with feet that were each armed with two extendable, sickle-shaped claws. Csiki says that the legs “would have allowed [Balaur]to subdue its prey more easily by itself, with deadly kicking blows, instead of trying to seize it (as in Velociraptor) or hunt it down in pack (as was suggested for Deinonychus, another close relative).” But he adds, with a note of caution and tongue firmly in cheek, “This is still extremely speculative. It might have been herbivorous, digging out carrots with the two large hyper-extensive claws!” Balaur’s features are big departure from the basic raptor body plan – all other species were lithe hunters with just one killing claw on each foot. With such unusual traits, you might think that Balaur was an early offshoot from the raptor dynasty but in fact, it was deeply nested within it. Its closest relative was the limelight-hogging Velociraptor. Balaur’s position in the dinosaur family tree also changes our understanding of evolution in Cretaceous Europe. Until now, scientists had thought that Romania was the bastion of species that has been stranded from the mainland since the much earlier Jurassic period. The dwarf plant-eaters support that idea because they’re all very early members of their respective families, each bearing a number of primitive characteristics. But Balaur doesn’t fit that bill – it’s arose fairly late in raptor history, and its closest relatives came from Asia. Some sort of species exchange programme must still have been operating between Europe and Asia well into the Cretaceous period. Reference: PNAS http://dx.doi.org/10.1073/pnas.1006970107More on raptors: