We all know that as we type on our keyboards or click our mice, we leave behind fingerprints that could be used to deduce our identities. But these prints aren't the only remnants of our presence. Bacteria from our skins also linger on the things we touch and they could act as a sort of living fingerprint.

The thriving community of bacteria and other microscopic passengers on our skin has many traits of interest to a forensic scientist. For a start, they are remarkably personal in their membership and stable over time. Just 13% of the bacteria on my palm also live on yours, and even identical twins can harbour very different microbes. Even after we give our hands a good wash, our individual communities eventually bounce back with a similar mix of members. Skin bacteria are also easy to dislodge. As we go about our daily lives, we leave a trail of our own personal bacteria on the things we touch, which can stick around for days or weeks.

Noah Fierer from the University of Colorado has found some preliminary evidence that these dislodged microbes could help to identify an individual. He showed that bacteria swabbed from keyboards and mice matched the microbes on their owner's skin more closely than those from other people. It's a promising technique, but David Foran, director of Michigan State University's Forensic Biology Laboratory, says that it's "utility in a forensic context is doubtful". It's unlikely to ever meet the high standards of certainty needed for a criminal investigation, although that probably won't stop it from appearing in a future episode of CSI. 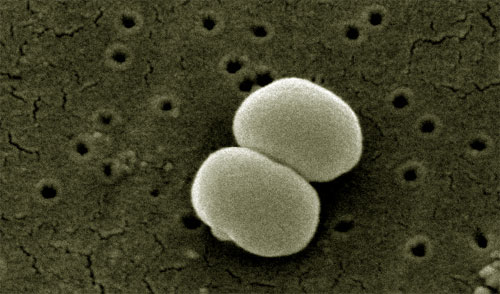 Fierer swabbed the keys of three computer keyboards as well as the fingers of their owners. By sequencing the DNA of the bacteria he found, he showed that the communities on keys and fingertips are a close match. They could be used to tell the three people apart, even though two of them share the same office.

All of these samples were taken an hour or so after the owners had last typed on their keys, but Fierer found that leftover bacteria can stand longer tests of time. After swabbing the skins of two volunteers, he found that two weeks later, the bacteria were still informative and the communities were unchanged, even if the swabs were kept in open containers at room temperature.

So far, that's not particularly impressive. Three is a vanishingly small number if we're seriously talking about applications in forensics. So for his next trick, Fierer sequenced bacteria from nine computer mice. He compared them to sequences from bacteria on the mouse owners' hands and to a database of similar sequences from 270 people who had never touched the devices. In every case, the mouse microbes were significantly more similar to the communities on their owners' hands than to those from the other 278 people.

Even after this promising result, Fierer is very measured about the prospects for this technique. Like other widely used forensic tools, identification by skin bacteria would need to undergo a lot of development and refinement before it could actually be used in investigations. This is just a 'proof-of-principle', an inkling that this technique is worth more research.

Would it work on a wide variety of surfaces, on objects that aren't touched as often as keyboards or mice, or on those that are touched by different parts of the skin? Could certain bacteria give away their owner's identity more than others? Would a database of hand bacteria be useful? And how would you deal with objects that had been touched by several people?

If this work pans out, Fierer suggests that skin bacteria could be used to provide independent confirmation for other lines of evidence such as DNA or fingerprint analyses. After all, the bacteria in and on your body outnumber your cells by a factor of 10, and their genes outnumber yours by a factor of 100. It's possible that the genes of these residents might be more useful in establishing our identities than our own genes.

But Foran is much more sceptical. He says that Fierer uses the word "match" throughout his paper but the word has a very specific meaning in forensics. "[A match] means that there are absolutely no incongruities between the data produced from a questioned sample and those from a known sample," he explains. That's very different to saying that a bacterial sample is more similar to those from person A than person B. "Perhaps it can be said it seems more likely person A touched an object than did person B, however we definitely cannot say person A did touch the object."

The problem is that forensics requires a far higher threshold of certainty than skin bacteria are likely to provide. Foran notes that if a fingerprint is a 90% match to a questioned print, a forensic scientist would conclude that that person didn't leave the print. Likewise, a DNA sample that's 10% different would be a negative result, although in that case, you might look for a relative. He says, "The method presented will probably never lead to a match; given the huge amount of bacterial variability the authors find over time and even among different body parts, finding a true DNA match between questioned and knowns would be next to impossible. It would be far easier for the defense to argue that the suspect did NOT leave that bacterial profile."

More on our bacterial passengers: