For comic book characters, big doses of radiation are a surefire way of acquiring awesome superpowers, but in real life, the results aren't quite as glamorous. A victim of acute radiation poisoning can look forward to hair loss, bleeding, the destruction of their white blood cells and bone marrow, and severe damage to their spleen, stomach and intestines. 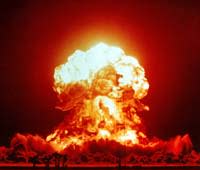 Radiation doesn't kill cells directly, but it can cause so much damage that they commit suicide, by enacting a failsafe program called apoptosis. Now, Lyudmila Burdelya and colleagues from Roswell Park Cancer Institute have found a way to block this cellular kill-switch, using a drug inspired by the unlikeliest of sources - the tail of the food-poisoning bacterium, Salmonella.

In early animal tests, the drug saved the lives of monkeys and mice that had been exposed to lethal doses of radiation. With further development and clinical trials, it could be used to protect cancer patients undergoing radiotherapy, or even people who are more inadvertently exposed through accidents or nuclear attacks.

Ironically, Burdelya started developing the drug by taking inspiration from cancer cells themselves. Switching off apoptosis is one of the tricks that cancer cells use to grow out of control. They do it by permanently activating a gene called NF-kB, a cellular bodyguard that protects the cell against the damaging effects of radiation, free radicals and infections.

NF-kB is the cell's go-to gene in case of emergencies and it switches on a host of other proteins that help to protect against damage, alert the immune system, and importantly, hold apoptosis at bay while defences are mounted. But in cancer cells, it is always active, which effectively makes the cells immortal. Cancer researchers are trying to overcome that by blocking the gene, but Burdelya wanted to see if she could switch it on in normal cells to help them survive bursts of radiation. 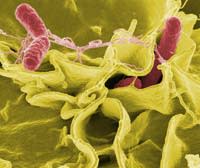 NF-kB is itself activated by proteins called Toll-like receptors, which recognise molecules that give away the presence of a threat. For example, one of these proteins - TLR5 - detects flagellin, a protein that some bacteria use to make the 'tails' that propel them forward. By right, this chain of events means that flagellin should make cells more resistant to radiation, by switching on TLR5 and NF-kB in turn, and blocking apoptosis.

Sure enough, when Burdelya injected mice with flagellin, she found that they could survive 10-13 Gray doses of radiation that would previously have killed them (and would certainly be enough to finish a human). The results were encouraging but tempered by some unwanted side effects caused by the flagellin, including a large immune reaction. Burdelya sidestepped the problem by engineering and testing a series of flagellin-like proteins.

Flagellin, but not as you know it

The most successful of these, snappily named CBLB502, could still switch on TLR5 and NF-kB but it didn't attract the attention of the immune system to the same exaggerated extent. It was also far less toxic than raw flagellin and mice could tolerate double the dose. The drug activated a parade of protective proteins that greatly reduced the levels of apoptosis in the vulnerable intestines of irradiated mice, and protected the stem cells in both their guts and their bloodstreams.

With a single shot of CBLB502 at less than 1% of the maximum dose, 87% of mice managed to survive an otherwise lethal 13 Gray of radiation. The drug completely outclassed all known protective chemicals. Even the maximum possible dose of the second-best chemical - amifostine - only saved 54% of the irradiated mice.

Timing was critical. At doses of 10 Gray or higher, the drug only protected mice from death if it was injected between 15 and 60 minutes before they were exposed. But at slightly lower (but still lethal doses)of 9 Gray, the drug was still effective for a day after injection, and it even saved 40% of mice if given within an hour of exposure.

The drug proved its mettle in monkeys too. A dose of 6.5 Gray is enough to kill about 75% of macaques within 40 days but a single dose of CBLB502 kept 65% of the monkeys alive past this point and extended the lives of those that didn't make it. The survivors had healthy levels of white blood cells and only suffered minor damage to their guts, spleens and bone marrow. 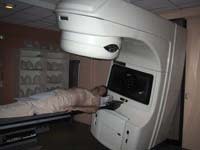 Burdelya suggests that the drug could be given to cancer patients who are being treated with radiation, to protect healthy cells from dying off. She treated tumour-bearing mice with three daily radiation doses of 4 Gray to mimic the regular treatments that cancer patients often go through. When mice were injected with simple saline solution, the accumulated damage killed them all but when the doses were pre-empted by injections of CBLB502, every one of the mice survived.

The celebrations would be short-lived however, if the drug defended tumour cells in a similar way. Fortunately, that wasn't the case and the tumours in protected mice succumbed to the radiotherapy as per usual. If anything, the addition of CBLB502 killed slightly more cancer cells than usual, which may be due to small immune boosts triggered by the compound's resemblance to flagellin.

Burdelya also saw to a final worry. Apoptosis exists for a reason, and there is a risk that protected cells could survive the effects of radiation but live with damage that will lead to cancer in the long run. With this in mind, Burdelya tested the drug on a strain of cancer-prone mice and found that after a burst of radiation, they did not develop tumours any quicker or more frequently than they normally would.

The results so far, especially those in macaques, are promising. The drug seems safe, effective and very specific in the defence it provides. Only human trials will tell us if the drug has a future in the treatment of cancer and fortunately, those trials are about to start in a matter of weeks.