Our bodies are serviced by a huge workforce of enzymes, which speed up the chemical reactions that rage within our cells. These enzymes have been crafted into a vast array of shapes and functions over millions of years of evolution but new ones can be generated on a microchip using the same principles.

Early attempts to design proteins from scratch resulted in fairly crude enzymes that were outperformed by nature's more elegant and finely-tuned efforts. Scientists have since developed more efficient artificial enzymes using the same evolutionary principles that generated naturally occurring ones. The process involves mutating an initial pool of enzymes to get a varied mix, testing them for an ability-of-choice, and weeding out the most successful ones for further development. 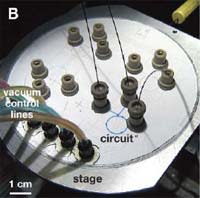 This is laborious and time-consuming work, and it requires the attention of experimenters at every step of the way. It's also not quite as elegant as a biologist might like. If designing proteins from scratch seems a bit like the work of a creator, then checking and steering the development of evolving proteins is rather like the work of an intelligent designer. A more Darwinian system would apply a set of rules to some starting ingredients and let events unfold without tampering.

That's exactly what Brian Paegel and Gerald Joyce from the Scripps Research Institute have done. They have created an automatic "evolution machine" that drives the evolution of an RNA enzyme without any human direction. All the experimenter has to do is to set some initial conditions, provide the ingredients and switch the machine on.

In their first successful trial, the duo used the machine to develop a more efficient version of an enzyme called an RNA ligase. Rather than the usual amino acids, the enzyme itself is a folded molecule of RNA. Its job is to speed up a chemical reaction which attaches the RNA ligase itself to another short stretch of RNA called a promoter.

Two other enzymes (reverse transcriptase and RNA polymerase) make new copies of any RNA ligase that has a promoter attached to it. This means that RNA ligases that are good at their job - sticking promoters to themselves - become more abundant and eventually dominate the mix of molecules. The more efficient they are, the more plentiful they become. In a similar way, living things that outcompete their rivals reproduce more quickly and become more numerous in a population.

The evolution machine uses a technique called microfluidics to carefully control the flow of liquids along tiny channels carved onto a microchip. The channels include a main loop where the ingredients are allowed to mix, and a series of valves that pump liquid in and out. The whole system is controlled by a computer so Paegel and Joyce could turn their backs on it once it had started. 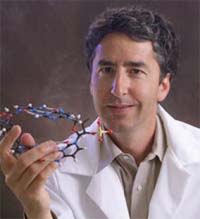 They started with a single RNA ligase that was randomly mutated to give over 2 billion varieties, all slightly different and some more efficient than the others. This variety provided the raw material for natural selection to work with. This melange of ligases was added to the mixing loop together with promoters, the two other enzymes and a chemical called thiazole orange. When this comes into contact with RNA, it glows with a distinctive orange colour under laser-light.

As the successful RNA ligases are amplified, the emit a stronger glow and when this reaches 10 times the original level, the machine withdraws 10% of the liquid and keeps it aside. The loop's contents are then flushed out, fresh ingredients are added, the isolated fraction is pumped back in and the cycle begins anew.

At certain points, the concentrations of promoter were reduced to keep the evolving populations under pressure. Only the most efficient enzymes, that can stick to promoters when they are scarce, will be amplified. By the end of the experiment, they had to work with about 20 times less material than at the start. Every time the levels of promoter were dropped, the remaining ligases were also removed and mutated again to increase their variety.

The experiment carried on for 500 cycles, which together took just under 3 days to complete. In the end, it produced ligases that were 90 times more efficient than their predecessors. The success of this new breed was the result of 11 mutations that all of them had developed.

By individually adding these mutations to the original ligases, and taking them away from the final ones, Paegel and Joyce could test the effects of each change. They found that three of the 11 were particularly important and by themselves, they boosted the enzyme's efficiency by 24 times. Two other mutations were only beneficial in the context of the others and alone, they actually made the enzyme less efficient. These complex traits only turned up at the end of the experiment, during the last few hundred cycles.

It's often (and wrongly) understood that evolution is a wholly random process, which some people use as an excuse to ignore the whole science altogether. But the evolution machine provides a beautiful demonstration of the ways in which evolution is both random and non-random.

Paegel and Joyce programmed the machine to select for enzymes that could carry out a certain chemical reaction in the face of falling levels of ingredients. They effectively set the selection pressures that guided the development of the enzymes - that much is not random. But the ways in which the enzymes met the challenge were random. Paegel and Joyce claim that the combination of 11 mutations they developed could not have been predicted from the outset. If they ran the experiment again, a wholly different set of mutations might emerge.

So far, the machine's use is limited by the very simple nature of the RNA ligase enzyme. We're a long way from using it to create new proteins based on amino acids with more complex functions. Even so, it provides a 'proof-of-principle' that such a machine is possible. Paegel and Joyce claim that the microfluidic systems are so precise and easy to use that they could eventually be used to govern the evolution of proteins, viruses and bacteria. A multitude of experiments could be performed on the face of a single tiny microchip.