That's a comment on my magazine's web site from a girl who goes by Mango. A lot of our readers love robots, and they write in to tell us so. I would guess that a lot of them, or at least a decent pie-slice, are also on the autism spectrum. Several of them wrote in to say so after our autism-themed issue. Here's Mango again:

I am a person with Asperger's and proud of it! I go to a gifted school, go to Lego League, and all in all feel pretty smart.

So I was intrigued by this New York Times article about robots in classrooms, especially robots designed to interact with autistic kids. A bunch of labs are working on versions of classroom robots right now. Some of them are not specifically aimed at autistic kids; South Korea, for example, is putting into its classrooms hundreds of robots that will play with the kids and act as teacher aides.

Though a robot is extremely patient and has a great head for facts, none of the robots, so far, are meant to replace teachers. Some give foreign language lessons (I'm sure they're vocabulary whizzes, but how are they with idioms?). Some just hang out with preschoolers, at an age where basic social interaction is the lesson. The article describes one robot that popular with the kids when it first entered a classroom, but had its arms yanked off by the end of the day. Its programmers cleverly rewired it to cry when kids pulled its arms. The result? Over-aggressive kids first backed off--then came back to give the crying robot a hug.

A robot can read your facial expressions and respond accordingly. It can use artificial intelligence and speech recognition to have a conversation with you. And with autistic children, it can conduct a kind of therapy.

In recent experiments at a daycare center in Japan, researchers have shown that having a robot simply bob or shake at the same rhythm a child is rocking or moving can quickly engage even very fearful children with autism.

"The child begins to notice something in that synchronous behavior and open up," said Marek Michalowski of Carnegie Mellon University, who collaborated on the studies. Once that happens, he said, "you can piggyback social behaviors onto the interaction, like eye contact, joint attention, turn taking, things these kids have trouble with."

The story quotes an 8-year-old with Asperger's who practices karate kicks with a robot. "I just love robots," he says, "and I know this is therapy, but I don't know--I think it's just fun."

On the one hand, it seems counterintuitive to treat autistic children, whose chief difficulty is interacting with humans, by having them spend time with a robot instead. But autism researcher Simon Baron-Cohen (yes, Sacha's cousin) speculates that autistic children find robots more appealing than people because robots are more predictable. He says that autistic kids "find unlawful situations toxic...They can't cope. So they turn away from people and turn to the world of objects."

So researchers have been working on robot buddies for autistic children for years. They avoid creepy androids in favor of cutesy machines. This little guy, for example, is tiny and squishy. But its young autistic friends are happy to give the robot a kiss, or feed it imaginary medicine when it has a Band-aid on its head. 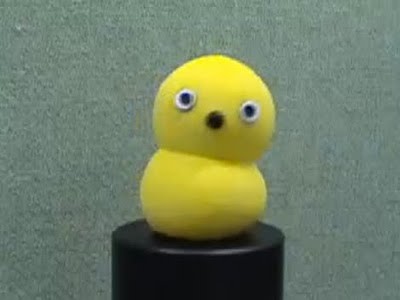 Of course, the robot also has cameras in its eyeballs. But if this is what the future of artificial intelligence looks like, I think I can get behind it.

Make sure you watch this video of the little guy dancing to Spoon before you disagree.