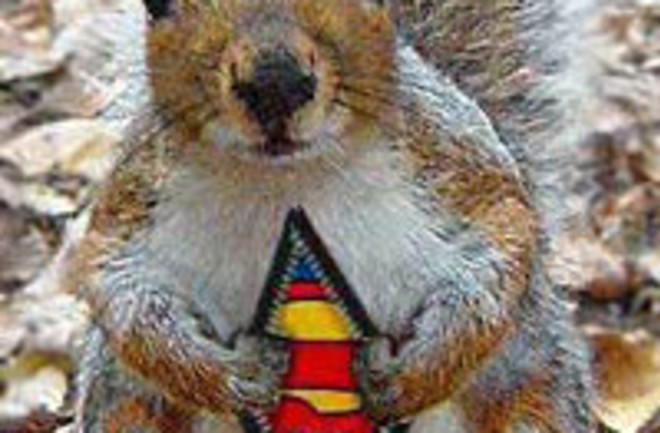 It seems stupid, even suicidal, to annoy something as dangerous as a rattlesnake. But squirrels, not known either for their wisdom or sensitivity to fellow creatures, seem to do it all the same. According to Aaron Rundus of the University of California, Davis, ground squirrels are regular snake menacers, biting their tails and kicking sand in their faces. These particular squirrels have a blood protein that binds to rattlesnake venom and neutralizes it, so adult ground squirrels are immune to rattlesnake bites. The younger pups are vulnerable—though they have the magic protein, they don't have blood for the defense to work. So when a rattlesnake comes nosing around ground squirrel burrows, the adults are quick to react. Running toward the snake, raising a ruckus, and waving their tails like mad. Rundus initially assumed this motion is a warning sign intended to get the attention of other squirrels, much like the Bat Symbol: "Snake in the area!" But that didn’t make sense in light of other squirrel behavior: Once the community was alerted, the squirrels didn’t just protect the young ‘uns and let the snake slink off. Instead, they attack. “They often confront [the snakes] very closely, often inches in front of their face. They pelt the snake with sand or rocks,” Rundus says. “They will also, if given the opportunity, often to try to run around and bite them, often in the tail because that’s a safer place to bite.” Rundus also noticed an odd quirk: When facing a rattlesnake, a pit viper especially sensitive to infrared radiation, the squirrels’ tails heated up, which would make the motion much more visible. Rundus theorized that the IR signal tells the snake to back off, making it less likely to attack squirrel pups. But testing the hypothesis was hard. Training a squirrel to heat up or cool down its tail on command is apparently not all that easy. So he did what any self-respecting scientist would do: He built a robosquirrel. The robot—which occupies the skin of a dead squirrel—is built to have the core body temperature of the squirrel and to wave its tail around with sheer robotic exuberance. It was also interactive: The closer the snake approached, the more frantically the squirrel waved its tail, just like its living brethren. And, true to Rundus’s hypothesis, when the robosquirrel’s tail heated up to taunt a rattlesnake, the snake was much less likely to attack than if the squirrel’s tail remained cool. The tail waved in front of the snake “Na-na-na-na-na-na!”-style apparently tells the snake both that it has been seen and that its continued presence in the area will result in bombardment with dirt wads and possible squirrel bites. The snake usually retreats. “This study serves as a good reminder that when we working with animals, we need to enter their perceptual world,” Rundus says. ”If we could only jump into the squirrels’ head, that would be interesting,” says Rundus. Note: There are no obvious

connections between the robosquirrel and the mammals that have recently attacked the Middle East.

Note #2: In case you have some doubts about whether a rattlesnake can be one nasty customer, please consider that a decapitated rattler recently bit a man and nearly killed him.