Assassin bugs deceive spiders with coat of many corpses 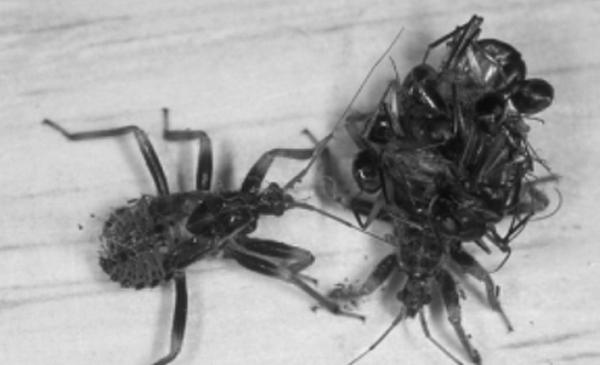 This is an old article, reposted from the original Wordpress incarnation of Not Exactly Rocket Science. I'm travelling around at the moment so the next few weeks will have some classic pieces and a few new ones I prepared earlier. The animal world is full of charlatans. Some have bodies shaped by natural selection to fade into the background or resemble other harmful species. Yet others, like chameleons and octopuses, have the rare ability to actively change their colour or shape to actively hide themselves from view. Many species disguise themselves through their behaviour rather than their bodies; like human soldiers in camouflage gear, they don special suits to remain inconspicuous. Decorator crabs, for example, coat their shells with a collection of sea anemones, algae, corals and sponges, held on with Velcro-like bristles while other crabs actively carry these living masks with specially modified legs. These species have the cartoonish air of a man carrying a pot plant in front of him while sneaking past on tip-toes. But some charlatans are not so amusing. Robert Jackson and Simon Pollard from the University of Canterbury have been studying a pretender with a much more gruesome disguise – the ant-snatching assassin bug Acanthaspis petax, which covers itself with the corpses of its own prey. The word ‘bug’ has a specific technical meaning – it refers to a group of insects, the Hemipterans, that have sucking mouthparts. Most, like aphids, use these to gulp plant sap but the assassin bugs use them for murder. They grab passing insects, stab them with their syringe-like mouthparts, inject paralytic saliva and digestive enzymes and suck up the broken-down bodily fluids. Most species discard the lifeless husks but the ant-snatcher secretes fine sticky threads from its back and there it sticks the remains of its prey. An earlier study suggested that the assassin bug’s cadaverous backpack protected it from other predators and now, Jackson and Pollard have tested this theory by pitting the bugs against jumping spiders. Jumping spiders are superb stalkers that use keen vision and accurate leaps to ambush prey. Jackson and Pollard let three species of jumping spiders loose upon either naked assassin bugs or those bearing ant-coats. They found that the spiders attacked the naked bugs about ten times more than the covered ones, even if the bugs in question were actually dead and preserved. The fact that the dead shielded bugs were just as uninviting as their living peers suggests that the disguise has nothing to do with a change in the bugs’ behaviour or motion but everything to do with the ants they carried. Clearly, when faced with a jumping spider, wearing a coat of dead ants can mean the difference between life or death to an assassin bug. Why does it work? Unlike the decorator crabs, the assassin bugs weren’t plastering themselves with local wildlife to blend in. Certainly, the experiments were done in glass cages with no other ants around. Instead, Jackson and Pollard suggests that the ants break up the bug’s form so that instead of a characteristic shape that the spider can tag as ‘prey’, it sees a jumbled mess that doesn’t look like anything it has ever eaten before. It sees the bug, but doesn’t register it as a meal. There is a final possibility though. Ants are not easy prey – they have chemical weapons and strength in numbers and many small predators give them a wide berth. So the bugs’ grisly defence may rely on using ants in particular and Jackson and Pollard are now putting this idea to the test. Reference: Jackson, R.R., Pollard, S.D. (2007). Bugs with backpacks deter vision-guided predation by jumping spiders. Journal of Zoology, 273(4), 358-363. DOI: 10.1111/j.1469-7998.2007.00335.xHave a look at some amazing photos of this beastie here.More on mimics: