Are the oysters listening? 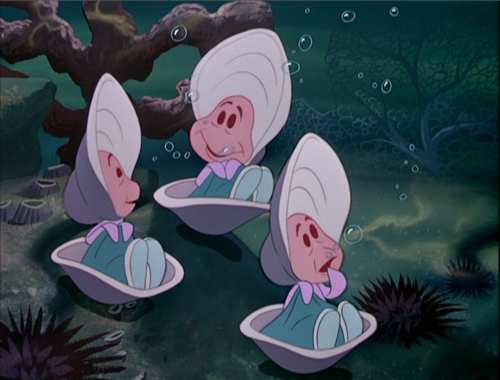 Remember the scene in the original Alice and Wonderland movie when the walrus lures a group of baby oysters out of the water by playing the flute? Obviously, the plausibility of this scene relies heavily on oysters having a sense of hearing - but how realistic is that? These scientists set out to answer this question by playing different frequencies of sounds to Pacific oysters and measuring their valve movements in response. They found that "oysters transiently closed their valves in response to frequencies in the range of 10 to <1000 Hz, with maximum sensitivity from 10 to 200 Hz." These frequencies are produced by many of the oysters' natural predators (fish, lobsters) as well as human activity (boats, drilling) and -- you guessed it -- flutes. Clearly, the walrus knew what he was doing.The sense of hearing in the Pacific oyster, Magallana gigas "There is an increasing concern that anthropogenic noise could have a significant impact on the marine environment, but there is still insufficient data for most invertebrates. What do they perceive? We investigated this question in oysters Magallana gigas (Crassostrea gigas) using pure tone exposures, accelerometer fixed on the oyster shell and hydrophone in the water column. Groups of 16 oysters were exposed to quantifiable waterborne sinusoidal sounds in the range of 10 Hz to 20 kHz at various acoustic energies. The experiment was conducted in running seawater using an experimental flume equipped with suspended loudspeakers. The sensitivity of the oysters was measured by recording their valve movements by high-frequency noninvasive valvometry. The tests were 3 min tone exposures including a 70 sec fade-in period. Three endpoints were analysed: the ratio of responding individuals in the group, the resulting changes of valve opening amplitude and the response latency. At high enough acoustic energy, oysters transiently closed their valves in response to frequencies in the range of 10 to <1000 Hz, with maximum sensitivity from 10 to 200 Hz. The minimum acoustic energy required to elicit a response was 0.02 m∙s-2 at 122 dBrms re 1 μPa for frequencies ranging from 10 to 80 Hz. As a partial valve closure cannot be differentiated from a nociceptive response, it is very likely that oysters detect sounds at lower acoustic energy. The mechanism involved in sound detection and the ecological consequences are discussed." Related content: Flashback Friday: Researchers identify mysterious sounds first heard by 1960s submarines.Anemones can detach from rocks and swim, and it looks hilarious.Study finds that male fiddler crabs are a**holes.