Are Fish Farms the Answer to World Hunger or a Blight on the Oceans? 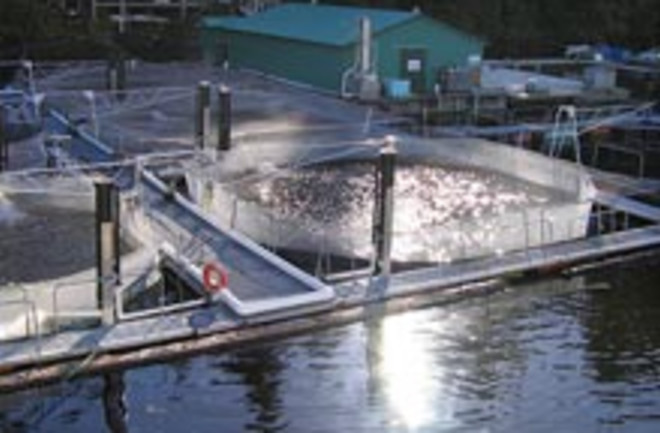 A new United Nations report has sparked outrage with its suggestion that fish farming should be dramatically increased to keep pace with growing fish consumption. Although the U.N. report presents aquaculture as a way to take pressure off wild fish stocks, conservationists say that fish farms indirectly snatch the food from many wild predator fish, marine mammals, and birds. Environmental groups say the report

appeared to ignore the huge environmental problems posed by fish farms: particularly the need to "hoover up" vast quantities of smaller fish like blue whiting, anchovies, sardines and sand eels, and more recently even krill, to feed the farmed fish [The Guardian].

Critics also worry that water-borne antibiotics and hormones used in fish farms are polluting the ocean, and say that farmed fish are more likely to catch infectious diseases, which escapees can transmit to wild schools. Aquaculture has undergone explosive growth over the last few decades.

In the 1970s, farming accounted for 6% of the fish available for human consumption. By 2006—the most recent year for which figures are available—that has risen to 47% [The Economist].

But the conservation group Oceana just released its own assessment of the consequences of that aquaculture, and painted a grim picture. Catching small fish to grind up into meal for fish farms has the potential to disrupt the entire marine ecosystem, Oceana's report says. Says Oceana's Margot Stiles:

"These fish may be small. They're not glamorous. But they do all of the work in the ocean.... They're the foundation of the food web. Without them, we would lose the things we really care about - the seabirds, whales, tuna and salmon" [San Francisco Chronicle].

Oceana has asked for catch limits for small prey fish, and is also pushing for a West Coast ban on fishing for krill, the tiny shrimp-like creatures that are a crucial food source for whales and other marine animals. That ban was adopted by the Pacific Fishery Management Council three years ago but has been held up by the U.S. Commerce Department.

Scientific and environmental groups are asking officials in the Obama administration to approve the West Coast ban on krill fishing and to extend catch limits to other prey species [San Francisco Chronicle].

In response to environmentalists' criticisms, the U.N. has suggested that aquaculture operations should focus on herbivore fish species, like tilapia and carp. Related Content: 80beats: As the Thawing Arctic Opens to Ships, U.S. Moves to Protect the Fish 80beats: To Save the Fish in the Sea, Give Fishers a Financial Share DISCOVER: Blue Revolution charts the rise of aquaculture, and the damage it can cause DISCOVER: Fish Farming Threatens Wild Salmon