Archerfish Can Recognize Faces, Too 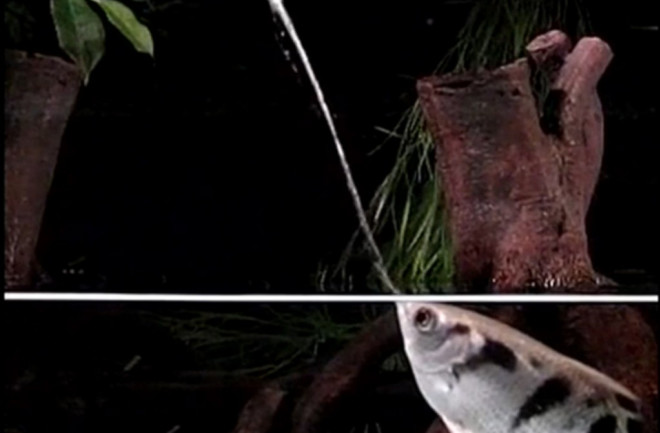 An archerfish aiming for prey on a leaf high above. (Credit: Screenshot Nature) Next time you peer into the water, be careful — the fish looking back at you might know more about you than you realize. In a study published Tuesday in Science Reports, researchers from the United Kingdom and Australia trained a species of fish to recognize individual human faces. While it took a bit of practice, the archerfish could pick out specific faces from a lineup with reasonable accuracy, indicating that animals can learn to recognize faces even if they don't possess the neural hardware thought to be a prerequisite for the skill.

This is important to researchers because there are two competing theories about facial recognition: it's a skill that can be learned, or it's an innate skill that relies on specialized circuits in the brain — humans, it's believed, devote an entire region of the brain within the neocortex to the task. Other animals, such as pigeons and dogs, can also identify faces, but they also possess a neocortex-like structure. They've also been exposed to humans for quite some time, and they may have learned to recognize faces to get along with us better. Archerfish, however, lack neocortical-like cells and haven't been exposed to humans. Therefore, if they started recognizing human faces, it could be an indication that facial recognition doesn't necessarily require specialized neurons. That's not to say that humans don't have specialized face-spotting brain structures, only that animals have other mechanisms to accomplish the task.

Archerfish possess visual capabilities that other fish don't, which is key to their unique method of hunting. Instead of searching for insects on the surface of the water like most fish, archerfish shoot a jet of water from their mouths that knocks prey off perches above the water and into their waiting mouths. Accomplishing such a task requires a high degree of visual acuity, making archerfish a good candidate to test facial recognition in species lacking a neocortex. Working with two sets of four fish, the researchers used food rewards to train the fish to hit a specific face when presented with two options. They used a series of 44 digitally created faces to test the fish. After training sessions, every fish could eventually pick out the face that led to a reward from a succession of different faces. In a second experiment, the researchers used black-and-white faces with the head shape removed, and found that the fish still succeeded at their task, indicating that they could work from facial features alone. That the fish consistently chose a single face from a lineup of 44 is, perhaps, an indication that they can pick up on subtle differences in facial features. There are a few limitations to their study though: the faces used in the experiment were all viewed from the front, they all had the same facial expression and were of the same race. The neocortex might play a key role in more complex recognition exercises where the face is turned or the lighting is altered. In addition, archerfish can spot visual patterns in a way that most other fish may not be equipped to, meaning that the findings might not apply to other species. It is also unclear if the archerfish are seeing a face, or just learning the ability to recognize a set of visual clues. Still, the findings seem to indicate that an archerfish might recognize the person who incessantly taps on its aquarium wall.