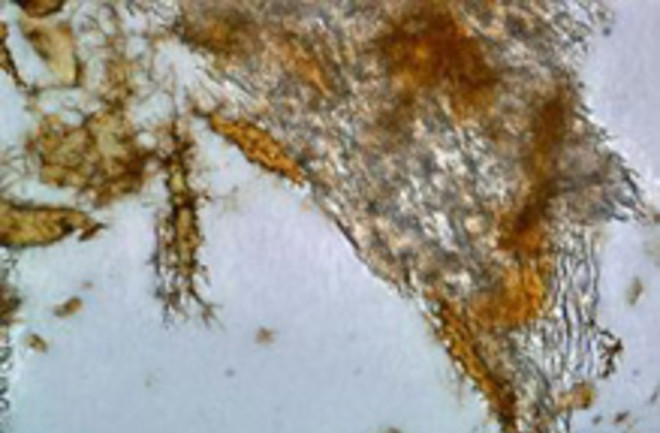 Continuing the controversy over whether tissue can be extracted from fossils, cell-like structures resembling blood cells have been found in the leg bone of a dinosaur excavated from a Montana site. The researchers, led by Mary Schweitzer, have sequenced a set of proteins belonging to the 80-million-year-old remains of a duck-billed hadrosaur.... confirmed the presence of collagen, laminin and elastin proteins from the bone.... [and] independently verified amino acids in dinosaur tissues [GenomeWeb]. In 2007, Schweitzer first reported finding soft tissue, and then collagen, from the leg bone of a 68-million-year-old Tyrannosaurus rex excavated two years prior. But her team's research later proved controversial, with some questioning whether the samples they had obtained had become contaminated with proteins from modern species [Nature News]. So the team set out to replicate its findings, and searched for dinosaur fossils buried in deep sandstones, which were likely to be well preserved, and they speeded up the process of getting them from the field to the lab [Cosmos]. The team conducted thorough tests of the sample and sequenced the proteins with mass spectrometry, then confirmed the results independently with two different labs. Not wanting to repeat the skepticism and controversy of two years ago, John Asara, one of the researchers,

is making public immediately the nearly 27,800 spectra from which the collagen proteins were identified. A similar cache of 48,000 spectra wasn't made available for the T. rex specimen until more than a year after the initial publication, prompting criticism from some researchers

]. In addition to finding collagen and individual proteins, the team has also reported finding cell-like structures resembling blood and bone cells. The proteins should reveal more about dinosaur evolution because they vary much more between species [New Scientist]. Asara said the results, published inScience, should show that the previous study "was not a unique occurrence.... This is the second dinosaur species we've examined and helps verify that our first discovery was not just a one-hit wonder" [GenomeWeb]. He added that the study also "shows that the ability to study fossils at the molecular level is possible" [Cosmos]. Related Content: 80beats: Researchers Debate: Is It Preserved Dinosaur Tissue, or Bacterial Slime? DISCOVER: Schweitzer's Dangerous Discovery DISCOVER: Paleontology chronicles Schweitzer's work Image: Mary H. Schweitzer. Hadrosaur red blood "cells" surrounded by white, fibrous matrix.