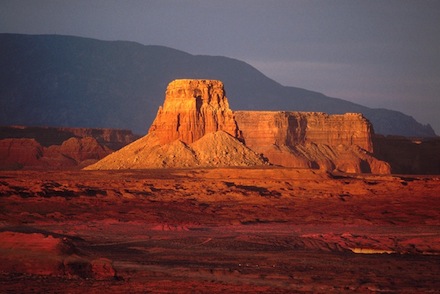 Today a team of scientists offer a new way of thinking about the environmental fix we're in. In the words of one of the scientists, we're driving around on a mesa in the dark with the lights off and without a map. We may fall off the edge of the mesa before we realize where the edge was. The scientists argue for a safe operating space for the planet, which they propose should be bounded by limits on the carbon dioxide in the air and other factors. That way, we'll stay away from dangerous thresholds and be able to pass on a healthy planet to our children. I write about this concept today in Yale Environment 360. Nature, which is publishing the concept today, has posted it and a number of commentaries here. Working on this story got me thinking (again) about the state of journalism. Because I'm teaching a class on writing and I'm a visiting scholar at NYU's journalism school, I'm getting a bit meta . And there's certainly plenty of food for metathought these days. For example, last week a new site called Futurity was launched by a network of universities. The site publishes a selection of science-related press releases from the universities. As you can see, the site is well-organized and designed. As newspapers close science sections, you can't help but look at Futurity and wonder if this is the future. And, in fact, Curtis Brainerd wondered just that in a piece he wrote last week for the Columbia Journalism Review. Futurity justifies their existence as follows:

Equally significant has been the recent decline in science and research coverage by traditional news outlets. For decades, universities have partnered with journalists to communicate their work to the public, but that relationship is evolving. At the same time, research universities are among the most credible and trusted institutions in society, and now have the ability to deliver their news and information directly to readers without barriers or gatekeepers.

In an increasingly complex world, the public needs access to clear, reliable research news. Futurity does the work of gathering that news. Think of it as a snapshot of where the world is today and where it’s headed tomorrow. Discover the future. [Emphasis mine]

I don't need to tell you that you should read everything I say about Futurity with the proviso that I am a reporter, and that I make my living in large part writing for magazines and newspapers. I do not write press releases. But, that being said, I would submit to you that for a university seeking to get out the message about its research, this argument about a decline of science coverage is not really an argument at all. People who read pieces on Futurity will not come to it by watching television or by listening to the radio. They will come to it on the Internet, either as regular Futurity readers, as curious Googlers, or as readers of other sites following links. And on the web, arguments about declining coverage lose their traction because the same article that appears in a single publication can be read by millions and millions of people who do not actually subscribe to that publication. What Futurity does do, however, is allow universities and research institutions to go straight to the reader. Originally, press information officers at these places wrote press releases, which, as the name implies, were things intended to get the attention of the press in the hopes that they'd cover something you're doing. Futurity calls what it publishes "news," but it's still being written by employees of the organizations that are the subject of that news. I have great respect for some public information officers; the stuff they write is, in some cases, wonderfully clear and informative. There's good information to be had on Futurity. But I always treat press releases as a starting point. I do not, for example, assume that a piece of research is actually important just because a press release says it is. Imagine a press release with the headline, "Minor study published that is really not all it claims to be." Such things just don't exist. As a result, press releases and university-penned news items have a serious shortcoming as "news." Consider this story I just wrote. You can read the press release from the University of Minnesota (the home institution of a co-author) here

. There are lots of quotes from people. All those people are co-authors. The press release quotes nobody who is not a co-author. When I wrote my article, I interviewed several co-authors at length, and I also got in touch with a number of outside experts. Some liked it. Some didn't. I mean, they really didn't. They thought the whole idea of a safe operating space for civilization was meaningless from the start. Thus, my article was about a debate engendered by a new idea. These sorts of debates--with plenty of sharp elbows--are at the heart of the scientific process. But I don't see how Futurity can reflect it. I'm sure Futurity is here to stay, and so it will be up to readers to decide what kind of writing they want. Here, dear reader, is my sales pitch.