Antarctica: Up Close with The Ross Sea Party 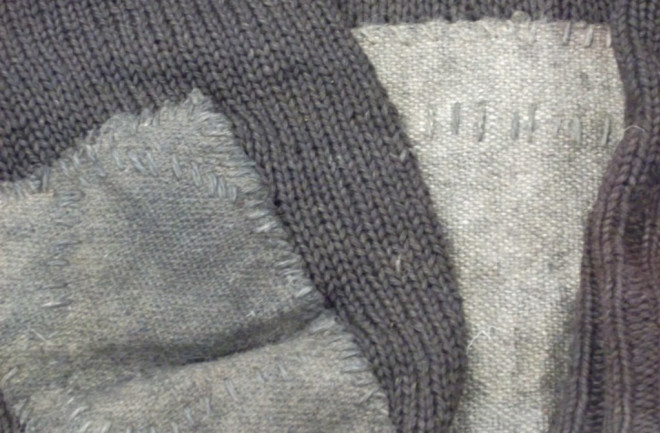 A close-up view of a hand-stitched repair to a sweater from the early 20th century, Ross Island, Antarctica. All photos in post credit: G. Tarlach.(Join me now in the wintry darkness of Antarctica. Here at Dead Things, I'll occasionally share posts from my now inactive personal blog, Stories That Are True

. I'll re-post things I feel might be of interest to anyone with a curiosity about the past and, in this case, Antarctica. I was fortunate to live there — McMurdo Station on Ross Island, specifically — for 20 months (one summer and two winters). This winter's night visit to the lab of the Antarctic Heritage Trust's conservators, who worked at the nearby New Zealand outpost Scott Base, has stayed with me for reasons you'll soon understand.)

After a week’s delay due to weather, I got to go on a field trip last night, rumbling in the van over ice-slicked, dark roads the two miles (give or take) to Scott Base, the New Zealand station just over the hill from us, to the workspace of the Antarctic Heritage Trust. During the summer, a few conservators examine the historic huts in and around Ross Island, which the Kiwis are largely responsible for maintaining. They select items that are in desperate need of preservation work, as well as items that they can’t identify (past records were not the most, shall we say, detail-oriented) and bring them to the AHT workspace at Scott Base. In the winter, three conservators spend the long dark working on those items brought back in summer. Every item brought in from the huts (there are four on Ross Island, built by Robert F. Scott’s men) first gets photographed, like this box, found under floorboards at Cape Evans hut:

The bag of corn beside it is an example of the kinds of things they find in these boxes after opening them, sometimes well-preserved and sometimes not. Because summer temps often get just above freezing, a lot of items such as flour and corn can get moldy — but not always, depending on where the box was and whether it was exposed to temperature fluctuations. Not bad for 100 year old corn, huh? Food that is not moldy is returned to the container as found. Foodstuffs (or other items) that are rotten, moldy, spoiled or otherwise pose a health risk are sent to New Zealand for incineration. Items, depending on what they are, are then taken apart, cleaned and/or restored. In the lab, they're tracing the manufacturer of various parts of the first bicycle ridden in Antarctica, back in 1910. Beside it on the table is half of a marine dredge that they're cleaning. In this case, cleaning it involves soaking it in highly alkaline, boiling liquid for days on end. The bicycle parts are on the table beside it, the wheels are in the box underneath.

The conservators admitted there are things that they have not identified, such as these canvas and wood items marked as “wind socks” on a previous inventory… never mind the items are too heavy and don’t swivel. Two people in our group thought they might be sea anchors for a small boat, or even another kind of marine dredge, and when they offered this up you could see the conservators eyes light up with excitement.

Sure, it looks like a dog collar — it looks exactly like the dog collars I’ve seen in Antarctic exploration exhibits in New Zealand and the States, but what you can’t tell from this photo is that it’s about half as big as the collars I’ve seen. They think it may have been a horse hobble, but I think it may have been a puppy training collar. With all those dogs about, you think they didn’t get busy and have litters? I’m jus’ sayin’. My favorites were the textiles, including a blanket taken from Scott’s bed, still covered with wax drippings from a candle and strands of reindeer hair from the sleeping bags they used.

Scott's blanket is in the foreground. The white hairs are reindeer, and right in the center of the blanket is a small, light circle of candle wax. The oilskin coat (below) laid out on the table was found at the Cape Evans hut rolled into a ball, and the conservators had to heat it slowly with a hair dryer to get it to soften enough to de-crumple (note: not actual conservator term). After taking a close look at it, they discovered the name “Anton” written inside the collar and realized this must have belonged to the Russian horse handler Scott hired to select and care for the Siberian ponies he brought with him on his doomed expedition.

The oilskin coat that belonged to Scott's Russian horse handler. The enlarged photo laying on the coat shows the condition it arrived in, scrunched up into a ball for a century. [Sidenote: Robert F. Scott, ponies? Seriously? Dude, what were you thinking? Did you do any research before you sailed on down here or did you just give a “Pip! Pip! Tallyho!” and pack your ponies aboard a ship and head south? I think you would have had more success with sleds pulled by cats.] Of everything we saw in the lab, I was most taken with a patched sweater believed to be from the Ross Sea Party of 1914-17. Shackleton arrived at the Weddell Sea, on the other side of the continent, in the Endurance with the goal of traversing Antarctica. While the Endurance was sailing to its doom, another ship, the Aurora, traveled to the Ross Sea. The crew had the mission of laying depots, or food caches, on this side of the continent for Shackleton’s team to pick up and use as they trekked across the icy wastes.

A woollen jumper, or sweater, patched with canvas, possibly from the Ross Sea Party of 1914-17. Everyone knows how the Endurance got stuck in ice and crushed, leaving Shackleton and his men stranded until Ernie showed he had the minerals to row, row, row a tiny boat through the insane Southern Ocean to get help and save all his crew (the dudes, anyway… the dogs and cat, sadly, were killed early on). While Shackleton was getting his hero on, the Aurora crew was, well, experiencing technical difficulties. Everything from the ship not being outfitted for Antarctic travel to papers not in order delayed their departure from Australia. Once in Antarctica, the party was beset with infighting, poor decision-making and a long list of events that make it sound like a prototype of Survivor, only without the bikinis and sunblock. (You can now view photos of the Ross Sea Party, found and restored by the conservators in a season subsequent to my visit).

Patched long johns — bottoms up! — another likely artifact from the Ross Sea Party. The nadir of the Aurora expedition came when a gale blew the ship far out to sea, stranding a shore party for two years. One member died of scurvy and two others had the bright idea to walk to the next hut across thin sea ice (and were never seen again). The rest of the party, however, not only survived on a diet of seal blubber but they still managed to lay the depots for Shackleton, thinking he would be needing them. I’ll be honest. I don’t think you’d find that kind of dedication today. The reason the conservators feel the patched sweater belongs to a member of the Ross Sea Party is because, well, it’s so patched. And if you lean in close, which we were able to do, you could smell the stink of seal blubber, not only their diet staple but the main fuel source.

Its owner appears to have recycled materials such as provision sacks to mend the sweater. I looked at that sweater with its uneven, homely stitches and I smelled its rancid, smoky stench, and I saw in my mind a man, leaning over his work in the dim light, trying to patch his sweater one more time, maybe wondering why he ever thought coming to Antarctica was a better deal than going off to fight in the trenches of Belgium or France. Yeah, the stitching got to me. It was an amazing hour spent seeing how the conservators work, their jobs equal parts art and science, their days a mix of painstaking detail work (often using their own spit… turns out human saliva is great for cleaning stuff!) and tantalizing mystery (“what is it?”). Yes, it was very cool to see the first bicycle ever ridden on the continent, to see century-old corn and Scott's blankie. But I know the image I’ll carry with me is that of a man bent over his clumsy needlework in the smoky, stinking light of a seal blubber fire, hoping to make his jumper last just a little longer, with no idea whether rescue would ever come.