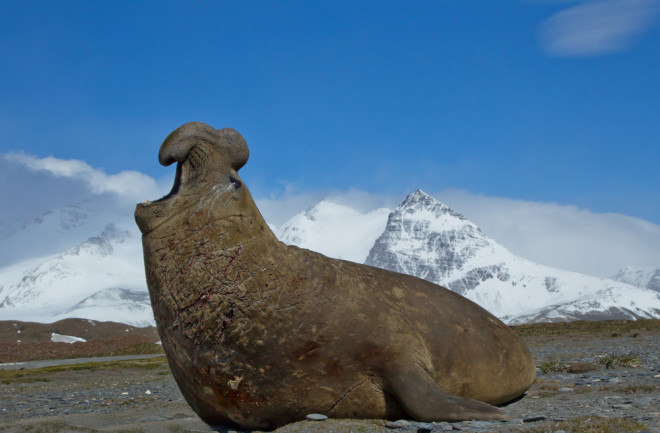 (Credit: MZPHOTO.CZ/Shutterstock) Seal scientists may not realize it, but they're collecting valuable data in places that humans don't have easy access to. Researchers from the California Institute of Technology published the results of a study in Antarctica that was aided by elephant seals who call the region home. Elephant seals outfitted with temporary sensors made thousands of dives to log data on depth, water temperature and salinity, and the information they gathered helped researchers better understand the dynamics of deep ocean currents that surround the Antarctic.

Researchers coordinated their study with Marine Animals Exploring the Oceans Pole to Pole (MEOP), an international collaboration of scientists who use ocean dwellers as volunteers (sort of) to collect data in hard-to-reach places in the oceans. MEOP finds animals whose natural behaviors take them to regions of scientific interest, and attaches non-invasive sensors to turn them into living, breathing instruments. The waters surrounding Antarctica are some of the coldest in the world, and it's over half a mile deep in some places. The currents circulating deep in the ocean are of great interest to researchers studying climate change in Antarctica, but sending probes into these places is both difficult and prohibitively expensive. The seals, however, are right at home in this environment — they regularly dive half a mile below the surface, for up to two hours, to search for fish and squid.

A seal from a previous study with a sensor attached to its head. (Credit: Fabien Roquet/MEOP)

In this case, researchers were interested in the Circumpolar Deep Water, a layer of relatively warm (well, just barely above freezing) water that circulates on the sea bed around the South Pole. The researchers believe that this mass of water may be responsible for the gradual thinning of Antarctica's ice sheets. The Circumpolar Deep Water resides deep in the ocean thanks to a unique property of cold water: it is most dense at temperatures slightly above freezing. While most substances get uniformly more dense as they get colder, water is unique in that it actually becomes less dense when it freezes, so warmer water can sink. Scientists weren't sure how this current moved, but with help from their deep-sea elephant seal team, they are getting a better picture of what's happening underneath the surface. The sensors collected data as the seals rose from the deepest point of their dives and sent it back to researchers via satellite. Comparing data at different times and from different locations in the Bellingshausen Sea, near where some of the most at-risk glaciers are located, revealed that this deep water does indeed circulate near the ice sheets, where it is warm enough to begin melting them. The majority of the water makes its way up the Belgica Trough, a massive trench dug into the seafloor by ancient glaciers. Pushed by currents, the warmer water makes its way inward, where it mixes with cooler water in a kind of underwater tornado that swirls it toward land and then back out again. Their paper was recently published in the journal Geophysical Research Letters An important caveat to the researchers' findings is that they didn't gather data over a long period of time, so it isn't known if this swirling mechanism is new or has been occurring for thousands of years. What is clear is that this phenomenon is contributing to the melting of the Antarctic ice sheet, a process once balanced by the formation of new sea ice, but that equilibrium has been offset in recent years due to climate change.