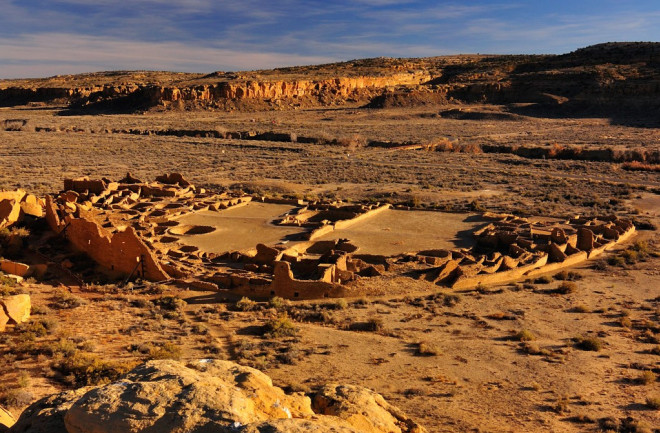 Sites like Pueblo Bonito in northern New Mexico reached their maximum size in the early A.D. 1100s, just before a major drought began to decrease birth rates throughout the Southwest.Credit: Nate Crabtree Photography With 7 billion people now inhabiting the planet -- more than at any other time in history -- you'd think we're having more babies than ever before. But a millennia ago, birth rates were actually higher in the Southwest than they are anywhere in the world today, researchers have found. Back then, the regional population soared -- and then crashed eight centuries later. Can modern-day humans learn anything from the ancient Puebloans' downfall? Indeed we can, says a team of anthropologists at Washington State University, who report surprising population trends in the first millennial Southwest in as study published today in Proceedings of the National Academy of Sciences.Tracking the Boom  Sifting through a century's worth of data on thousands of human remains found at hundreds of sites across the Four Corners region, the area where modern-day Arizona, New Mexico, Colorado and Utah meet, the researchers crafted a detailed chronology of what's called the Neolithic Demographic Transition, when people began eating more grain and less meat. WSU anthropology professor Tim Kohler and graduate student Kelsey Reese put the start of the ancient population boom in the region at around 500 A.D. By that time, people had adopted two of the hallmarks of civilization: settled agriculture and food storage. They were growing mostly maize, which had become a dietary staple, accounting for about 80 percent of calories. With plenty of food to go around, crude birth rates -- the number of newborns per 1,000 people per year -- increased steadily. But those halcyon days came to a sudden end around 1300. Within 30 years, the northern Southwest was virtually uninhabited. Mysterious Decline It's likely that Mother Nature played a significant role in the population's decline: A major drought that gripped the area in the mid-1100s was the beginning of the end, Kohler says. Until about 1280, the farmers left and conflicts raged across the northern Southwest. But the babies kept coming. "They didn't slow down -- birth rates were expanding right up to the depopulation," he says. "Why not limit growth? Maybe groups needed to be big to protect their villages and fields." As many as 40,000 people lived in the region in the mid-1200s, but suddenly, it emptied out. No one is really sure why, but Kohler suspects the population became too big to feed itself as the climate changed and growing conditions worsened. And as people began to leave, the community deteriorated, making it more difficult for anyone staying behind to fight off intruders and build and maintain infrastructure, he says. Interestingly, people in the southern Southwest, who had developed irrigated agriculture, did not experience the same population boom their dryland-farming neighbors to the north did. Consequences of Growth Kohler says the Sonoran and Tonto people, who inhabited what we know today as southern Arizona, probably didn't have more children because it would have been difficult to develop more farmland for them to use given limited surface water supplies. And water from irrigation canals may have carried harmful disease-causing bacteria and viruses, he adds. Groups to the north, who relied on precipitation from the skies to water their crops, would have been able to expand maize production into new areas as their populations grew -- until the drought came. Whatever caused the northern ancient Puebloans' decline, Kohler says, their fate shows that "population growth has its consequences." He points to the warning of Thomas Malthus, who warned back in the 18th century that humans would eventually become too numerous for Earth's limited resources to support. Despite huge advances in farming and food distribution systems, modern-day humans are still vulnerable to catastrophic changes, and shouldn't take for granted the resources and climate we depend upon for survival, he says. Kohler: "We can learn lessons from these people."