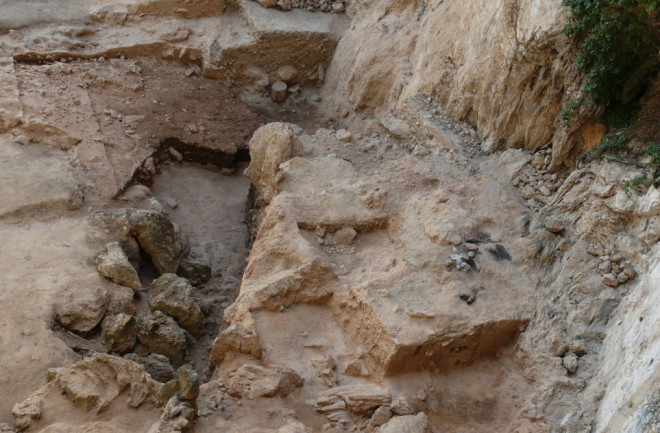 The El Salt archeological site. Credit: Ainara Sistiaga Club-wielding Neanderthals ate nothing but meat, right? Wrong, suggests a new study from researchers at MIT and the University of La Laguna in Spain. Their analysis of human fecal remains from El Salt, a Neanderthal site in southern Spain that dates back 50,000 years, found traces of plants as well as meat in these hominids' diet. The findings, published today in the open access journal PLOS ONE, provide the first direct evidence that Neanderthals were omnivores rather than strict carnivores. A more well-rounded diet containing tubers, berries and nuts as well as pigs, cows and other animals was probably better for their health, the researchers note.

"It's important to understand all aspects of why humanity has come to dominate the planet the way it does," says Roger Summons, one of the authors on the paper. "A lot of that has to do with improved nutrition over time." Researchers found the fecal remains in El Salt, a Neanderthal excavation site in Alicante, Spain. By grinding the soil into a powder, and then extracted organic matter from the sediment using solvents, researchers were able to look for biomarkers that would signal whether the fecal remains were of human origin. After confirming that they were, scientists then looked for signs of coprostanol, an animal-derived compound, and 5B-stigmastanol, a substance left from the breakdown of a plant steroid called phytosterol. While only some samples held biomarkers of plants, that could actually indicate significant plant consumption, because gram for gram, there is more cholesterol in meat than there is phytosterol in plants, so it would take a significant plant intake to produce even a small amount of metabolized phytosterol.

Reconstructing a diet from 50,000-year-old remains is no easy task. For instance, researchers have previously examined bone fragments for carbon and nitrogen isotopes to determine what kinds of prey Neanderthals ate, which was helpful in differentiating between protein sources. But it led researchers to underestimate plant consumption. Other researchers thought they had solved the mystery of whether Neanderthals were exclusive meat-eaters when they found plant microfossils in Neanderthal teeth. But Ainara Sistiaga, another of the paper's authors, says they may have consumed the plant matter indirectly through the stomach contents of prey, not by eating plants directly. The discovery of plant-laced feces is much stronger proof that Neanderthals had a taste for greens, she says, and not just flesh alone. "We believe Neanderthals probably ate what was available in different situations, seasons, and climates," Sistiaga says.