Ancient Greek athletes did it gibbon-style 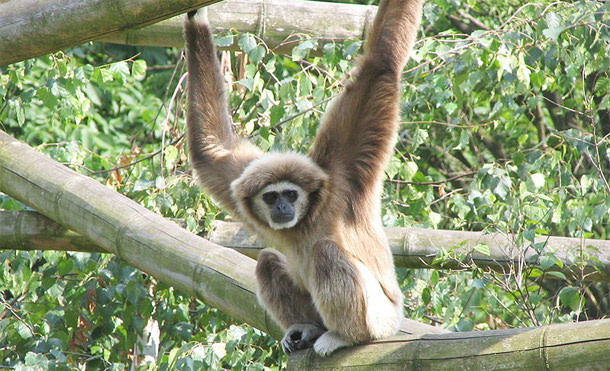 In the Olympic Games of Ancient Greece, long-jumpers would leap while carrying weights called halteres in their hands. From either a standing start or a short run, they swung the weights and leapt as their arms came forward. The halteres each weighed up to nine kilograms, and would have added around 17 centimetres to a 3 metre jump. Olympians first used the hand weights in 708 BC, but other apes were jumping with a very similar technique millions of years earlier – gibbons. Gibbons are undisputed masters of the treetops, best known for swinging around at unfeasible speeds from their long, powerful arms. Their wrists contain ball-and-socket joints, which allow their entire body to easily pivot about their hands. This style of movement, known as brachiation, is a gibbon speciality (see video below). But these apes are also accomplished jumpers. Field scientists have watched them clear gaps as large as 10 metres. [embed width="610"]http://www.youtube.com/watch?v=4GvDFrEXJYE[/embed] This feat is all the more impressive because gibbons don’t have any of the usual adaptations possessed by jumping animals, such as long legs. For example, the bushbaby, another leaping primate, has long, powerful legs that contain special elastic tendons. As it crouches, it stretches the tendons across its knee, which then recoil during the jump to give it an extra boost of power. Other jumpers, from frogs to froghoppers, have their own special adaptations to give their legs a boost. Gibbons do not. Instead Anthony Channon from the University of Liverpool showed that they leap using the same adaptations that allow them to swing from branches – their massive arms and flexible trunk. Their arms are so big that they make up 17 percent of their body weight (ours account for just 11 percent). Channon filmed two white-handed gibbons at a Belgian animal park and modelled the physics of their jumps. As the gibbons took off, they stretched their flexible trunks and swung their arms forward, just like Ancient Greek long-jumpers swinging their halteres. This action shifts the gibbon’s centre of gravity far forwards to a point near its head, allowing it to transmit the force of its jump over a greater distance. Its legs are just half a metre long, but they effectively get to push its body over a full metre – twice their length. For comparison, an average human has 80 centimetre legs that push his or her body over 40 centimetres – half their length. 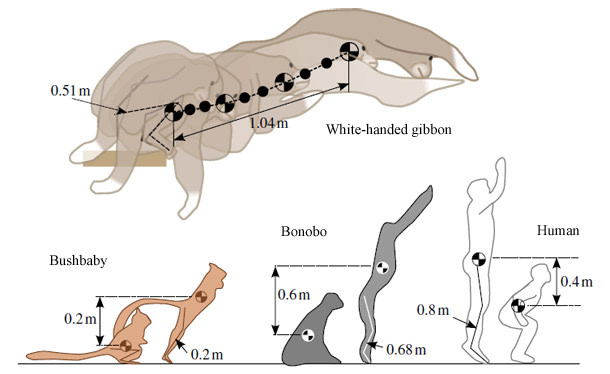 Channon found that with their mighty arm-swings, gibbons can accelerate their bodies to take-off speeds of over 8 metres per second, or 19 miles per hour. In doing so, they expend more energy for their mass than any other species measured to date – 34.5 joules for every kilogram, compared to 22 for a bushbaby and 6 for a human. And Channon’s gibbons were making far smaller jumps than wild gibbons have been seen to do. These figures probably underestimate their true ability. Reference: Channon,Usherwood, Crompton, Gunther & Vereecke. 2011. The extraordinary athletic performance of leaping gibbons. http://dx.doi.org/10.1098/rsbl.2011.0574Images from Matthias Trautsch and Anthony Channon; video by me.