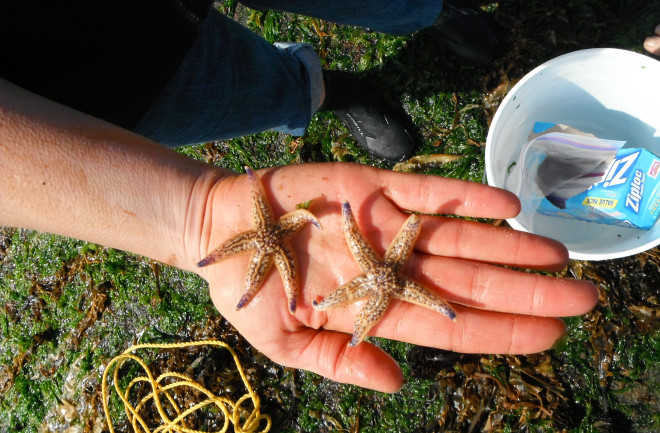 These Asian amur sea stars (Asterias amurensis) were found ~5,000 miles from home on the Oregon coast.Image provided by Oregon State University March 11, 2011, 2:46 PM, 45 miles east of Tōhoku, Japan. Fifteen miles beneath the waves, a magnitude-9 megathrust earthquake strikes. The Pacific and Eurasian tectonic plates suddenly shift, shaking the surrounding crust for six minutes and creating a tidal wave almost 40 meters high, which races towards the coast of Japan. In the hours that follow, it claims at least 15,894 lives, with thousands more unaccounted for. More than a million buildings are damaged or destroyed, causing nearly $200 billion in damages. The remnants of those buildings and all sorts of debris liberated by the moving waters have since spread the tsunami's legacy far beyond the site of impact. As a new study in the journal Science explains, thanks to objects set adrift by the tsunami's waves, more than two hundred and eighty species have been found on the wrong side of the ocean. How did hundreds of animals hitch rides across such vast distances? Well, to paraphrase the slogan from America's Plastics Makers, plastics made it possible.

"This has turned out to be one of the biggest, unplanned, natural experiments in marine biology, perhaps in history." —John Chapman, Oregon State University

Human beings are increasingly helping animals and plants move from one place to another, often causing unforeseeable and sometimes devastating ecological effects. Our penchant for seafaring allowed rats and other pests to colonize vulnerable islands where they prey on defenseless endemic species, for example. It's likely that flights to Guam carried snake stowaways nearly singlehandedly responsible for the eradication of the island's endemic birds. Now, our passion for plastic has led to long-lasting oceanic rafts which have ferried nearly 300 species thousands of miles from where they belong—whether they'll take hold there remains to be seen. A Tsunami of Debris The movement of living things around the globe—what scientists call 'dispersal'—can happen many ways. Lightweight seeds can be blown by the wind, for example. And floating debris can create oases for life to move across oceans, a dispersal method referred to as "rafting". Oceanic rafting certainly isn't new—it's thought that many lineages of animals and plants, like South America's monkeys and Madagascar's lemurs, rafted their way to the lands they now call home. But successful rafting events like these are thought to be rare, as common rafting materials like wood often degrade before they find their way to a new shore. Plastics, on the other hand, don't.

The flow of species after the 2011 tsunami. Infographic Credit: Carla Schaffer / AAAS Millions of objects, from small pieces of plastic to entire boats and docks, were washed to sea by the 2011 tsunami. About a year later, in the spring and summer of 2012, those objects started to appear around the Pacific. A dock from Misawa in Oregon on June 5th. A boat from Miyagi Prefecture on a beach in Ilwaco, Washington on June 15th. A tote on Midway Atoll that December; a refrigerator in Ocean City State Park, Washington, that February. And these bits and pieces of devastation just kept coming—researchers continued to collect items well into this year. In total, a team of scientists hailing from Oregon State University, Oregon Institute of Marine Biology, Portland State University, Williams College, Moss Landing Marine Laboratories, and the Smithsonian Environmental Research Center documented 634 different objects that were transported thousands of miles from Japan to the islands of Hawai‘i and mainland North America from Alaska to California. More surprising than the volume of objects, though, was what was found on them. The chunks of debris carried with them thriving communities of coastal organisms from the western Pacific. Unnatural Explorers "When we first saw species from Japan arriving in Oregon, we were shocked. We never thought they could live that long, under such harsh conditions," said John Chapman, OSU marine scientist and coauthor on the paper, in a press release. Over five years of the study, the researchers documented 289 living invertebrate and fish species from tsunami debris, including a bountiful diversity of barnacles, crabs, urchins, mussels, and even fish. Many of these were found associated with a single object. Since the researchers were only able to sample a minuscule portion of the millions of items that washed out to sea, that means dozens, perhaps hundreds or even thousands of other species may have also made the trek.

Japanese mussels (Mytilus galloprovincialis), barnacles (Megabalanus rosa), and sea anemones on a tsunami buoy washing ashore on Long Beach, Washington in February 2017. Image Credit: Nancy Treneman While the researchers were amazed at the sheer ruggedness of marine life, it was equally surprising that the debris survived so long at sea. For the first two years, many objects were from natural materials—wooden boards, pallets, boats. But over time, fewer and fewer such items washed ashore. Yet debris kept arriving; the researchers quickly realized that the unprecedented volume of moving species was due to the ubiquitous use of plastics and other non-biodegradable, manmade materials. Lead author of the study John Carlton pointed out that more than 10 million tons of plastic waste enters the ocean every year—creating millions of opportunities for species to move about. "And given that hurricanes and typhoons that could sweep large amounts of debris into the oceans are predicted to increase due to global climate change, there is huge potential for the amount of marine debris in the oceans to increase significantly." Non-Nuclear Fallout The cities and towns hit by the tsunami are still dealing with the wreckage. The site of the Fukushima nuclear reactor is still undergoing cleanup. And thousands of miles across the Pacific, pieces of the hard-hit Japanese communities are still carrying bits of their homeland to new shores. The organisms hitching rides on tsunami debris aren't necessarily on their deathbeds. "Not only were new species still being detected on tsunami debris in 2017, but nearly 20 percent of the species that arrived were capable of reproduction," said Jessica Miller, a marine ecologist with OSU. If they're able to reproduce, then they could end up making the Eastern Pacific their new home—potentially at the expense of current residents.

Marine sea slugs on a Japanese derelict vessel from Iwate Prefecture washed ashore in Oregon, April 2015. Image Credit: John W. Chapman "These vast quantities of non-biodegradable debris, potentially acting as novel ocean transport vectors, are of increasing concern," said Carlton, "given the vast economic cost and environmental impacts documented from the proliferation of marine invasive species around the world." Though to date, no species transported by the tsunami debris are known to have established along the US mainland, Carlton is skeptical that the bullet has been dodged. "It would not surprise me if there were species from Japan that are out there living along the Oregon coast," he said. "In fact, it would surprise me if there weren't."