An Archaeologically Fertile Area of Iraq Opens to Researchers

Archaeologists get their best chance yet to study Kurdish origins. 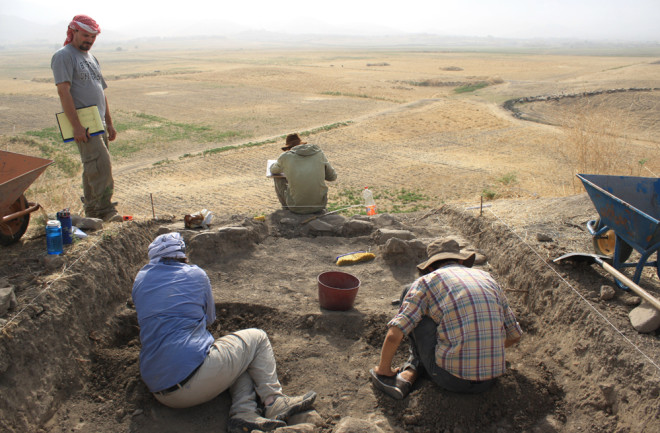 Michael Danti, the archaeologist leading the effort to search the isolated Kurdistan region, stands atop a dig near Gird-i Dasht thought to include artifacts from the Early Iron Age. | Allison E. Cuneo/Boston University

All of Iraq is not created equal — at least not for archaeologists. Its war-torn northern region, known as Kurdistan, has been closed to digs for more than half a century. But the Kurdistan Regional Government (KRG) is now allowing a team led by Boston University archaeologist Michael Danti to search the mountainous area for artifacts. Their continuing efforts in the western Zagros Mountains, along the Turkish and Iranian borders, likely represent the best chance yet to dig at the root of Kurdish origins.

Case in point: While widening a road leading into Iran, Danti says Kurdish workers dug into a 25-kilometer section of hillside, exposing the buried and burned remains of several stone, adobe and timber buildings from the Early Iron Age. After carbon-dating them, Danti believes these charred remnants are connected to local marauding by Assyrian King Sargon II, who sacked the region’s Kingdom of Musasir/Ardini about 27 centuries ago by unexpectedly attacking from the east. “We think this modern road probably follows the route that Sargon II followed in 714 B.C.,” says Danti.

Danti’s Rowanduz Archaeological Program — the first American project ever granted a five-year excavation permit in Iraqi Kurdistan — began work in spring 2013 at Gird-i Dasht. The site, thought to be an ancient fortified settlement, likely was continually occupied from roughly 3000 B.C. to A.D. 1800, during the area’s Bronze Age, Iron Age, and Middle and Late Islamic periods. The archaeologists hope to determine just how much interaction there once was between ancient cultures in the area.

Danti predicts the team will uncover the remains of an Early Iron Age “militarized frontier zone,” complete with fortresses, watchtowers and population relocation camps. It would be a fitting reminder that history often repeats itself.

[This article originally appeared as "Can You Dig It?"]