The 7,000-year-old line of boulders in Israel only fended off damaging storm surges for so long. 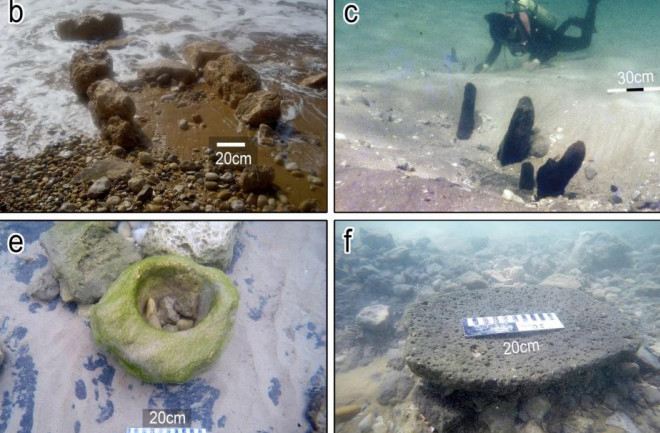 A figure from the paper showing structures and artifacts found at the site of the seawall. (Credit: E. Galili)

Buried in sand about 300 feet off the Carmel coast in Israel lies what is probably the oldest seawall archaeologists have found yet. People likely built this 300-foot long assemblage of boulders about 7,000 years ago as a way to fend off rising sea levels and the damaging storms that threatened the settlement.

The wall might have been successful for a while, says Ehud Galili, an archaeologist with the University of Haifa in Israel who co-authored the PLOS ONE paper describing the find. But the settlement is now submerged in the Mediterranean Sea — it’s clear who won this Neolithic battle with nature.

At War With the Sea

The defense and eventual retreat of these settlers shows humans have been fighting sea level rise for a long time. “It’s amazing that we’re facing the same problem we did 7,000 years ago,” Galili says.

The site of the barrier is Tel Hreiz, one of about 12 Neolithic sites in the area. When those settlements were active, Neolithic people were coping with the Laurentide Ice Sheet collapse, which drove sea levels up by around a quarter of an inch a year. Today, coastlines are even farther inland than they were then.

All of those settlements are covered in several feet of sand, which would be expensive to remove, Galili says. Instead, Galili and his colleagues wait for storms to shift the sand off the settlement and then go out with cameras and measuring tapes to document the revealed portions. Parts of the seawall emerged after 2012 and 2015 storms. “Little by little, like a jigsaw puzzle, we get the whole picture,” Galili says.

An illustration of the site based on aerial photography. Image "b" shows the sea levels today, while image "c" shows sea levels at the time the site was occupied. (Credit: J. McCarthy, E. Galili, and J. Benjamin)

The first hint that this wall was unique was that it was made of boulders. Other structures at this and similar settlements are built of small stones that individuals can carry. These seawall rocks each weigh about a ton and must have taken a coordinated construction effort to move around, Galili says.

Several factors helped the researchers determine the wall's function in ancient times. It runs parallel to the modern coastline and, according to estimates of sea levels at the time, it lies between land and where the ancient coast would be. And because the area would have seen seawater, it wasn’t suitable for livestock or freshwater. Had it been for defense, it would have surrounded the entire camp, not just lined the one side. “There’s no escaping the conclusion that this was a seawall protecting from wave activity,” Galili says.

The team doesn’t know how long the wall was successful for. But they think people lived there for about 500 years, and the pace of sea level rise meant that someone would have seen the ocean come closer by about 5 to 8 inches over their lifetime. Eventually, the encroaching waters would have created too many damaging storms and residual surges, and the people would have left, Galili says.

Sea level rise is slower today, but we’re still combating more frequent flooding. And though we have and are developing other technologies, we’re still using sea walls to hold water back.

Galili and his team think that retreat was the eventual choice for this particular group of ancestors, which means it might be on the table for us, too. “We face, more or less, the same dilemmas that Neolithic people faced,” he says. “We have more tech and resources, but at some point, someone has to make a calculation.”