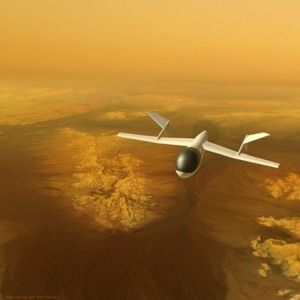 Saturn's moon Titan is a lot like Earth: it has rain, seasons, volcanoes, and maybe even life. Well, it's not exactly like Earth: the rain is liquid methane

, and any life would be based on methane

. But still, it's an interesting and relatively Earth-like place, considering the other planets and moons in our solar system. And University of Idaho physicist Jason Barnes says he has a perfect way to explore this moon: with a flying drone. Why use a flying machine rather than the rovers that worked so well on Mars

? With 1/7 the gravity but 4 times the atmospheric density of Earth, flying through Titan is 28 times easier than on our own planet. In fact, it's the easiest place to fly in our entire solar system. Drones on Titan can be heavier while requiring less fuel. With these facts in hand, University of Idaho physicist Jason Barnes has proposed AVIATR

, otherwise known as the Aerial Vehicle for In-situ and Airborne Titan Reconnaissance. As proposed, AVIATR would fly through Titan for a year on its radioactive power source plutonium-238, previously used on NASA's

craft, which explored Saturn and its moons. It would study the moon's quasi-terrestrial atmosphere and geology in close-up detail, and scout landing sites for future exploration. But even if AVIATR takes flight metaphorically speaking, it will be decades before it can actually fly in Titan's skies. The next funding cycle is in 2020, and it'll make 5 years to build AVIATR plus another 7.5 for it to reach Titan 880 million miles away. Perhaps someday, far in the future, children will finally get to try this: