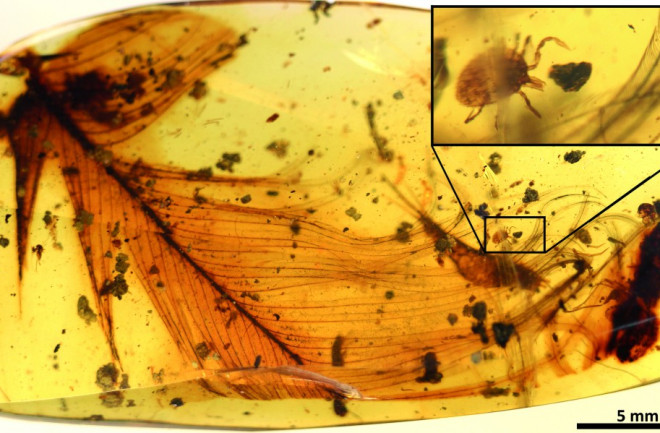 Turns out even dinosaurs got ticked off. A nearly 100 million-year-old piece of amber has preserved a tick latched onto a dinosaur feather, the oldest such preserved specimen of the parasite everyone loves to hate. Additional ticks found in related pieces of amber provide more evidence that the nasty critters were feasting on feathered dinos back in the day.

Disease-spreading, blood-sucking and just generally repulsive ticks are a modern scourge of wildlife and mildlife (humans, pets and livestock) alike. It was no different back in the Cretaceous Period, when, according to a study out today, the ugly ectoparasites were having their way with dinosaurs. Researchers identified several pieces of amber from Southeast Asia that include ticks preserved doing what ticks do, including one engorged with blood. Of the amber-preserved specimens covered in the new study, the most eye-catching is a tick hanging on to a dinosaur feather. While the species of host dino cannot be identified, researchers are confident it doesn't belong to a bird: That particular branch of the dinosaur lineage wasn't around 99 million years ago when some plant resin oozed over tick and feather to create this ghastly tableau for posterity. A Terrible Tick Another piece of amber analyzed in the study preserved not one but two mini-monsters, which the researchers describe as members of a new ancient tick group they're calling Deinocroton draculi, or Dracula's terrible tick. (The little guy hanging onto the dinosaur feather, however, is a new specimen of the previously identified Cornupalpatum burmanicum species.) While this terrible twosome did not get preserved with a dinosaur feather, the researchers found other evidence that the ticks may have enjoyed dino blood in their diet: attached to the deinocrotids were hair-like structures from skin beetle larvae. Delicious! Why should you care? Because skin beetles are nest-noshers. They eat the feathers, skin and hair of the animals that live in those nests. In the absence of any known mammal hair from this period, the researchers suggest the most likely occupant of the nest where this all went down was a feathered dinosaur. Bolstering the nest theory is the fact that the two ticks were found together, suggesting they and their kin were hanging out at an all-you-can-eat tick buffet, such as the living quarters of multiple hosts.

Tick-in-amber specimens (shown here with a modern, 5mm-long tick, center, for comparison) included in the study provided evidence that the animals preyed on dinosaurs during the Cretaceous Period. (Credit E. Peñalver) But wait! There's more. A third piece of amber preserved another deinocrotid (a female) so engorged with blood that it had swelled to eight times the size of the other examples of the species. You can't quite see it in the image above, but it's that blob (with a white splotch that resembles a Nike "swoosh") in the darker piece of amber at the lower right, somewhat out of focus. The super-sized bloodsucker suggests, say researchers, that these terrible ticks fed rapidly, putting the "gorge" in engorge.

I know what some of you are thinking: a blood-engorged tick! Can we make a dinosaur from it? No. The Large Marge of a tick found in the Burmese amber sampler was not completely covered by the resin, leaving part of the body exposed to contamination. As a result, mineralization has degraded the blood and made it impossible to analyze, much less use as a basis for de-extincting whatever the host animal was. Today's research

appears in Nature Communications. It's open access and includes many more equally skin-crawling images, most of them in focus, so be sure to check it out.