Amazonian Mega-Storm Knocked Down Half a Billion Trees 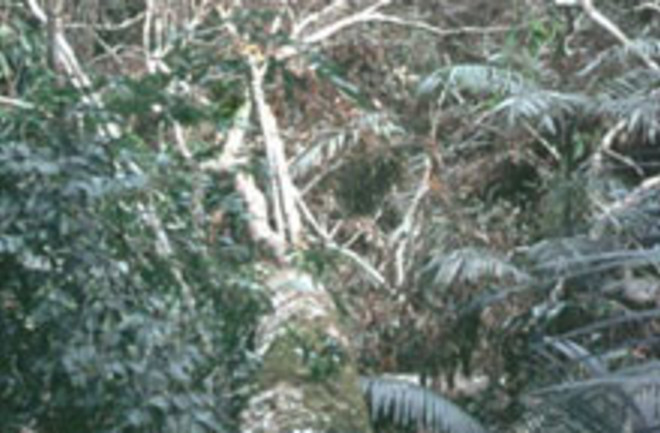 North Americans may remember 2005 as the year of Hurricane Katrina, but below the equator another fearsome tempest wrought its own devastation that year. From January 16th to 18th a line of thunderstorms tore through the Amazon basin, and researchers who conducted a botanical "body count" after the storm estimate that it laid low between 441 and 663 million trees.

Over the course of two days, a squall line measuring 620 miles (1,000 km) long and 124 miles (200 km) wide raged across the region from southwest to northeast, with buzzsaw-like winds of 90 mph (146 km/hr) causing widespread damage to property and a handful of deaths [Time].

, a forest ecologist at Tulane University, wanted to assess the damage caused throughout the massive Amazon basin, so he turned to satellites.

Using satellite images of about 34,000 square kilometers of the region from 2004 and comparing them with post-storm images, the researchers discovered that the wind had cut an enormous swath through the rainforest, running in a northeasterly direction across the Amazon basin. In all, the storm affected possibly 70% of the basin. [ScienceNOW]

Previously, other researchers had suggested that drought was responsible for a massive tree die-off in 2005, but Chambers says the satellite data and investigations of five field sites disproved the drought theory. In the hardest hit areas, the researchers found up to 80 percent of the trees snapped in half or blown over from their roots. Says Chambers:

"If a tree dies from drought, it generally dies standing.... It looks very different from trees that die snapped by a storm." [Discovery News]

. Environmentalists note that the huge blow-down didn't do the planet any favors, since the Amazon acts as a carbon sink--its living trees suck up and store planet-warming carbon dioxide. But as fallen trees rot, they release their stored carbon dioxide back into the atmosphere. What's more, some climate change forecasts predict that there will be more severe storms in a warmer world, so it's possible that the Amazon will be battered by more mega-storms in the future. Related Content: 80beats: Amazonians Turned Poor Land Into Great Farms—and Healthy Ecosystems

80beats: Massive Hydroelectric Dam in the Amazon Will Go Ahead

DISCOVER: Clear-Cutting Has a High Cost