Amazon Villagers Bring Giant Turtle Species Back From The Brink 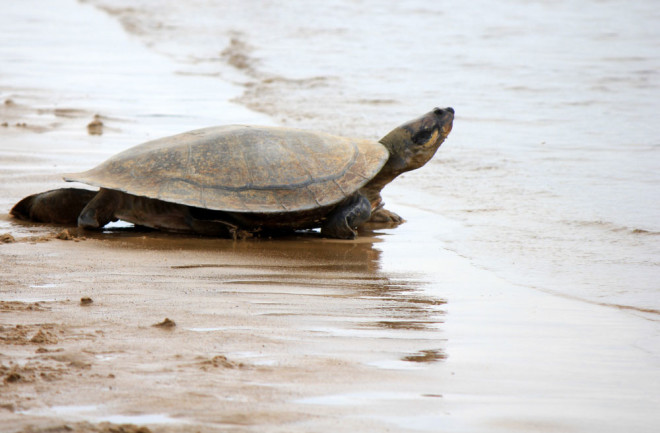 The giant South American river turtle stands on the banks of the Tabuleiro do Embaubal Wildlife Refuge in Brazil. (Credit: Tarcisio Schnaider/shutterstock)

A group of community members living in the Brazilian Amazon have created biodiversity hotspots by working to protect a single species, the giant South American river turtle. That’s according to a new study out Tuesday. The finding showcases the power of local conservation efforts, particularly in places that lack financial resources, the researchers say.

“Our research highlights the valuable conservation service currently provided by local communities, not just for turtles but for the wider ecosystem,” Joseph Hawes, an ecologist at Anglia Ruskin University in the United Kingdom and one of the study’s authors, said in a statement. “Recognizing the importance of their work shows the potential for effective conservation action, even outside existing formally protected areas.”

Turtles are a culinary delicacy in the Amazon and have been exploited since before contact with European explorers. Today poachers collect turtle eggs from the sandy nests of freshwater beaches. But, along a section of the Juruá River in the Amazon of western Brazil, community members will safeguard beaches from the illegal activity. And egg harvesting has plummeted on beaches under their watch.

Beach protection originally began in order to provide powerful rubber barons with meat and eggs, but local communities regained control when rubber subsidies collapsed in the 1940s. Now, during the five- to six-month long summer dry season, locals watch over the sands of 14 beaches from a wooden hut 24 hours a day, 7 days a week. In exchange for their constant vigilance, they receive a monthly stipend of food items worth about $110 U.S. dollars from a partnership between government agencies and universities. Their efforts have radically altered the protected beaches.

The conservation efforts extended beyond the giant South American river turtle, which as one of the largest freshwater turtles, earns its name by weighing in at as much as 200 pounds. Green iguana nests became seven times more abundant on the protected beaches compared to unprotected ones in the region. Migratory bird nests boomed with protected beaches hosting 8,700 nests compared to less than 400 on unprotected shores. The conservation efforts strengthened insect and fish populations, too.

Even in protected conservation areas, the watchful eye of locals made a difference. Poachers harvested 99 percent of nests not under surveillance in conservation areas. In contrast, egg robbing plunged to just about 2 percent on guarded beaches, the researchers found, meaning the biodiversity boom was thanks to the dedicated labor of locals more than the protected status of the land.

“This study clearly demonstrates the effectiveness of empowering local management action by stakeholders who have the largest stake,” Carlos Peres, an environmental scientist at the University of East Anglia in the United Kingdom, who led the new research, said in a statement.

“We need to trigger and then subsidize powerful ‘win-win’ alliances with local communities to both ensure their welfare and sustain the collective vigilance that can maintain the integrity of the world’s largest tropical wilderness region,” he added.