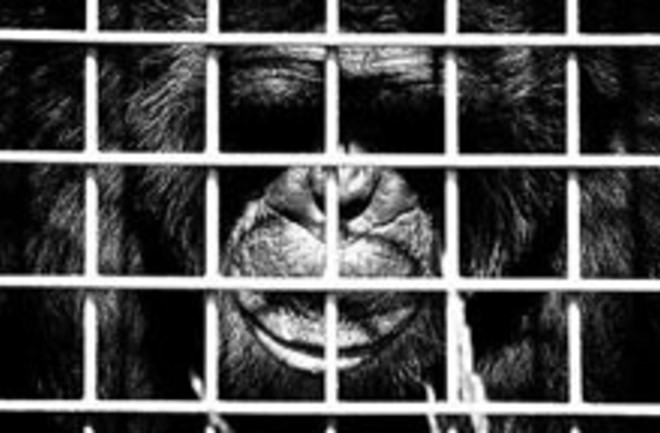 The nation's largest primate research center has been accused of mistreating its monkeys and apes by the Human Society, which sent an undercover investigator to work at the research center for nine months. The New Iberia Research Laboratory

houses more than 6,000 primates, including rhesus macaques and several hundred chimpanzees, on a sprawling 100-acre site in rural Louisiana. On its website, the Humane Society has posted clips of the video footage that show monkeys with open wounds, chimps being sedated with dart guns and falling from their perches onto the floor [The Scientist].

The Humane Society filed a complaint with the U.S. Department of Agriculture, listing 328 possible violations of the Animal Welfare Act. In response, U.S. Agriculture Secretary Tom Vilsack ordered an investigation of the facility.

"In light of the video evidence presented today, I am ordering a thorough investigation of animal welfare practices at New Iberia Research Center," Vilsack said. "If the allegations prove to be true, the American public can expect the perpetrators to be held fully accountable. I take the protection of animals very seriously, and will do my utmost to fully enforce the Animal Welfare Act" [The Times-Picayune].

Humane Society officials would not release the complaint but says it questions the quality of veterinary care and housing conditions, as well as the psychological well-being of the chimpanzees and monkeys. “A major issue for us is the psychological deprivation and torment that these animals are enduring,” said Wayne Pacelle, the Humane Society's president [Science Insider].

"The spinning around in the cages, the biting of open wounds, self-mutilation, those are indicators of frustration, neurosis and even psychosis" [ABC News].

The University of Louisiana at Lafayette, which runs the lab, has argued that the Humane Society's videos presented a distorted picture, and maintains that the research center is in compliance with all federal standards and guidelines on animal care. A statement also stressed the importance of primate research.

"Thanks to research involving primates, countless lives have been saved. For example, primates were critical to the development of vaccines for hepatitis A and B, now common pediatric immunizations. In addition, the chimpanzee is integral to current efforts to develop vaccines for hepatitis C, which globally affects more than 170 million people" [ABC News]