Snowball, the sulphur-crested cockatoo, is an internet superstar. He's known for his penchant for grooving to music, notably Everybody by the Backstreet Boys. As the music plays, Snowball bobs his head and taps his feet in perfect time with it. If it speeds up or slows down, his rhythm does too. He is one of two parrots that are leading a dance dance revolution, by showing that the human behaviour of moving in time to music (even really, really bad music) is one that's shared by other animals.

People who've attended parties at scientific events may question the ability of humans to move to a beat, but it's a fairly universal skill and one that many people thought was unique to our species. After all, domesticated animals like dogs and cats don't do it, and they spend their time with humans and have been exposed to our music for thousands of years. Other animals may produce periodic sounds or perform complex dances, but sensing and moving in time to complex rhythms is a different matter.

Both groups of researchers believe that the parrots' dancing skills depend on a talent for "vocal learning" - the ability to mimic the sounds of other individuals. To do this, animals need to have excellent coordination between their sense of hearing and their motor functions. Indeed, after searching YouTube for videos of dancing animals, Schachner only found evidence of moving to beats (a talent known as "entrainment") among 15 species that practice vocal learning - 14 parrots and the Asian elephant.

Snowball himself came to Patel's attention after the young scientist saw the parrot on YouTube. Snowball's owner has bought him at a bird show at the age of 6 and noticed that the rhythmic cockatoo would bob his head along to the Backstreet Boys. Over the next six years, the man and his daughter danced with the bird using "pronounced arm gestures".

In his lab, Patel showed that Snowball could alter the tempo of his moves as the music he listened to sped up or slowed down. Demonstrating how far people will go in the name of science, Patel created 11 different versions of Everybody by the Backstreet Boys (Snowball's favourite track), that were anywhere from 2.5% to 20% faster or slower. Patel classified Snowball's movements as "dancing" if he bobbed his head in time with the beats, and he did so in about 60% of the trials. He managed to keep time during all the variants of the track, except for the very slowest ones.

During the experiment, Snowball showed sustained bouts of excellent timing followed by periods where he lost the beat somewhat. That's very similar to the way that young human children learn to move to music but Patel quite rightly raises the possibility that Snowball may just have been moving randomly to the music and occasionally synchronised to it by mere chance. But statistical tests say otherwise - the odds that he was simply fluking his rhythm were 1 in 500.

It's possible that Snowball's boogieing was limited to music he was familiar with. But Scachner found that he and Alex were all too capable of dancing to new tunes. She says, "Alex had never heard the music we played for him in the study before. It was entirely novel; we made it ourselves. For most of the stimuli Snowball heard, he had only heard these songs once or twice before, and a dance-like response was reported on the first time he heard them. So it doesn't look like these animals underwent any sort of intensive training to make this response happen."

Scachner recorded both birds moving to a variety of percussion-heavy original compositions with a range of different tempos. Both birds bobbed their heads in time to the beats. Through her own independent analysis, Scachner found that they did so far more consistently than expected by chance. In some trials, their rhythm was as perfect as that of human listeners.

Schachner says "Claims of human uniqueness are defeated by even one well-documented case study demonstrating the existence of a capacity in a non-human animal." Two case studies then, should be doubly compelling. The big question though is how widespread the ability to move to a beat is in the animal kingdom.

Both groups of scientists suggest that the ability is limited to animals that can learn to mimic each others' calls. It's an exclusive club, which includes whales and dolphins, seals and sea lions, elephants, some bats, parrots, hummingbirds and songbirds (most impressively in the spectacular lyrebird). Their abilities depend on strong ties between their sense of hearing and their motor control and specifically on a part of the brain called the basal ganglia, which also supports our own ability to perceive beats.

To test that theory, Schachner turned to YouTube, where dancing animals are particularly popular. She found almost 4,000 videos of animals moving to music and analysed each for any synchronised movements that might be generously described as dancing. She found that only videos featuring vocal mimics fit the bill, and only those of 15 species - 14 types of parrots and the Asian elephant. In at least 9 of those, the movements were consistent enough that they were unlikely to have arisen through chance. 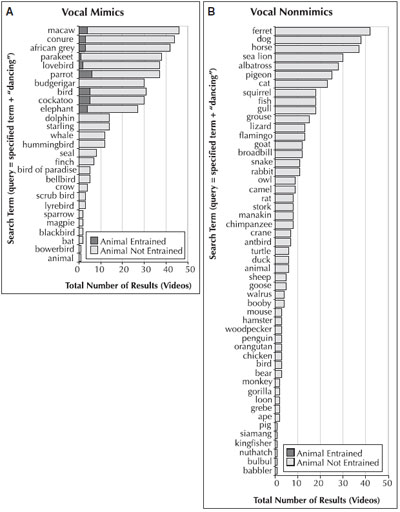 Among the species that don't mimic each other's sounds, Schachner couldn't find a single example of true entrainment, even among those that spend a lot of time with us (cats or dogs). Even in cases where people spend a lot of effort training dogs to take part in "canine freestyle" dance competitions, there was no evidence that the pooches were moving in time to the music.

Of course, there are many biases that affect whether a video ends up on YouTube or not, but there's no reason to suspect that vocal mimics would be relatively more represented. In fact, quite the opposite was true - non-mimics outnumbered the others by a factor of two. All in all, Schachner's study strongly suggests that vocal mimicry is a must if animals are to boogie in time to beats.

Even our closest relatives, apes and monkeys, lack this skill. Chimps can certainly learn from one another, but they don't mimic each other's sounds and Schachner found no video evidence that they could move to a beat. That will obviously need to be tested further, but it's telling that she put nine cottontop tamarin monkeys through the same tests as her parrots, and all of them came up short.

These studies shed some light on the origins of our own appreciation for music. Some scientists believe that our brains are specifically adapted in some way to perceive and respond to music. Others say that our fondness for melodies is just the by-product of some other mental skill, such as vocal mimicry. Snowball and Alex suggest that the second idea is right.